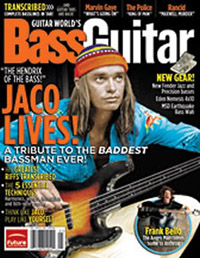 Bass Guitar is a UK-based music magazine established in 2003. Originally a bi-monthly publication until 2009 it is now published monthly.

IT IS A CLICHÉ THAT CELEBRITIES tend to be shorter in real life than they appear on stage. John Entwistle, who often wore brightly-coloured Cuban-heeled ...

The bass maestro behind Cream, for several years now a successful solo artist in his own right, looks back on his remarkable career with Joel ...

ALTHOUGH THE WORLD of metal is full of fearsomely talented bass players, many of which have appeared on these hallowed pages in recent months, few ...

The Mötley Crüe survivor talks to Joel McIver about business manoeuvres, string-boiling and how saliva can make your bass sound better. ...

Deftones bassist Chi Cheng takes Joel McIver through the highs and lows of being in one of the world’s top alternative metal acts. Just don’t ...

HEROES COME and heroes go. Most rise to the top and stay there for a while before their star fades; a few endure for a ...

MONTREAL-BORN bassist Melissa Auf Der Maur, something of a four-string legend on the alternative rock and grunge scene since the early 1990s, has recently released ...