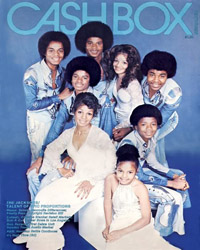 Cash Box magazine was a weekly publication devoted to the music and coin-operated machine industries in the United States, and carrying charts of record popularity, which was published from July 1942 to November 1996.

THE ALAN Freed "Rock-n-Roll" Ball held at the St. Nicholas Arena, New York, on Friday and Saturday nights, January 14 and 15, had to be ...

THE ROLLING STONES are in action in the United States for a tour that currently includes 14 major cities in most of which they will ...

CECILIO AND Kapono, a hirsute Hawaiian duo sharing acoustic and electric guitars, opened the show. Seemingly attempting to be another Seals and Crofts, their pleasant ...

ERIC CLAPTON, kicking off his new American tour, provided the perfect program for his fans — a total recycling of his old hits. Initial baying ...