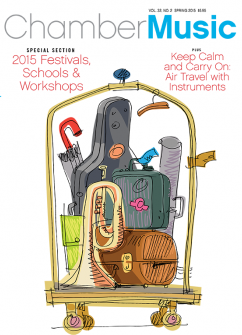 Chamber Music is the only national magazine dedicated to the art and business of small ensemble music.

Don Byron: Of Romance and History

FOR THE LAST TWO columns, we've ridden in the Wayback Machine to peer into how jazz has in practice been a kind of chamber music ...

Greg Osby: Musical Archaeology: Greg Osby's Performances/Recordings from Duke to Monk and beyond

NEW JAZZ FANS often have well-intentioned questions I dread, like, "What records should I listen to?" One of my stock answers: "Thelonious Monk Plays Duke ...

THE GUITAR is arguably the most eclectic and democratic of instruments. Some form of it appears in nearly every society. Anyone can learn to play ...

WITH BLUES DREAM (Nonesuch), an album that interprets the blues as the foundation for jazz, bluegrass, Thelonious Monk, soul, Western Swing, heavy metal, and other ...

NOT FOR NOTHIN' (ECM) is bassist Dave Holland's latest CD, and the laconic title could sum up the man himself, his instrument's history, and the ...

HERE AT THE beginnings of the 21st century, jazz faces several dilemmas, some creative, some commercial. After an often vitriolic and demoralizing period of consolidation ...