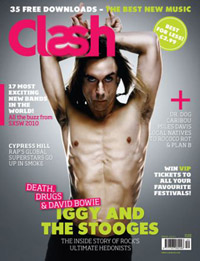 Clash is a popular music and fashion magazine and website based in the United Kingdom, and founded in 2004. The magazine is published 10 times a year.

Retrospective and Interview by Kris Needs, Clash, May 2007

IN EARLY 1967, John Peel started playing tracks from the debut album by a new Californian group called The Doors. With no knowledge of the ...

SKIPPING TO THE conclusion before the qualifying: 21st Century Breakdown is an abject failure, a hollow-sounding shadow of the zeitgeist-riding, multi-platinum American Idiot. ...

GRIZZLY BEAR are about to take a step into the unknown. Again. "This is probably the biggest thing we've been asked to do here in ...

Clash recently spent some quality face-to-face time with the three members of the Beastie Boys: Adam Yauch a.k.a. MCA, Michael Diamond a.k.a. Mike D, and ...

The Clash: Spotlight On The Clash — London Calling

IT DOESN'T seem 30 years since that night at Wessex Studios when The Clash were putting the finishing touches on London Calling. We'd been sitting ...

IN 1975, LOU Reed was the most dangerously fascinating figure in rock 'n' roll. With his old associates Bowie and Iggy having turned respectively into ...

WITH THE release of this seventh studio album from the Nicest Man In Rock and his sweat-flecked colleagues, there can be no doubt that Foo ...

JAZZ. The word alone is enough to set some listeners on edge. Honking, squawking, screeching horrors. Well, that's one assessment, at least, and sometimes accurate ...

ARCADE FIRE's penchant for an album-uniting concept is nothing new. 2010's multi-award-winning The Suburbs arrived informed by its makers' upbringing, at the fringes of bigger-city ...

RAP WOULD BE poorer without Eminem in it. His voice is a colourful, powerful, persuasive one – and his career achievements have undeniably brought a greater ...

THE FIRST FOUR minutes of Stefani Germanotta's third album proper are completely fascinating. 'Aura', this set's opener, manages to be a multitude of songs at ...

Katy B: In Conversation: Katy B

BRITAIN MIGHT BE smitten, as much of the world is, by a Queen B from H-Town, but we've our own pop princess coming through the ...