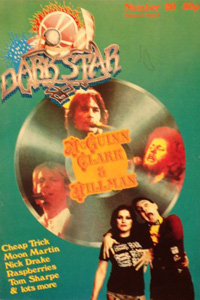 Dark Star was a UK based music magazine published for 26 issues between 1975 and 1981. It was edited by Steve Burgess and featured record reviews and music news mostly from the American music scene.

IN THE END they traded their tired wingsFor the resignation that living bringsAnd exchanged love's bright and fragile glowFor the glitter and the rougeAnd in ...

WAY BACK THEN, in DARK STAR 3, I wheeled out something called "Gene Clark: Zenmaster", a highly personal crit of the myth-spinner himself, whose music ...

ONE OF THE problems that your average culture hero doesn't suffer from is trying to sleep nights, it's the days that get slept through 'cause ...

I HAVE THIS adrenaline-fueled, hyper-hallucinatory recall of the first time I saw Richard Thompson away from club stages and makeshift podiums in Hyde Park. He ...

Grateful Dead, Robert Hunter: "Sometimes The Cards Ain't Worth A Dime... If You Don't Lay 'Em Down": The Robert Hunter Interview

HAPPY TRAUM was briefly in England in November '79 and, by luck, an interview was arranged. ...

Grateful Dead, Jefferson Starship, Robert Hunter: "Sometimes The Cards Ain't Worth A Dime... If You Don't Lay 'Em Down": The Robert Hunter Interview #2

Grateful Dead, Robert Hunter, Jefferson Starship: "Sometimes The Cards Ain't Worth A Dime... If You Don't Lay 'Em Down": The Robert Hunter Interview #3