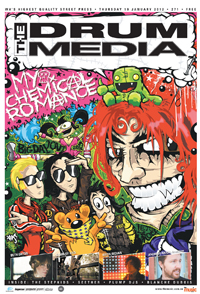 Drum Media was a free weekly tabloid-sized music and lifestyle magazine (street press) established in 1990 and based in Sydney, Australia. It was distributed throughout Sydney, Wollongong, Newcastle and Canberra, and surrounding districts. The magazine was released every Tuesday (every Thursday in Perth). In 2013, the magazine changed its name to The Music. It is no longer audited.

SOMETIMES I COULD just run into a river and drown. ...

SO YOU ASK what magic is? And the roof above you has lights like long red teardrops hanging from it, splashing down stars into the ...

The Birthday Party, Rowland S. Howard, You Am I: Want To Rule Britannia? Australian Bands Breaking The UK

DANIEL LANOIS is a strange kettle of fish. You wouldn't call his voice magic, but there's a lot going on in his mind and how ...