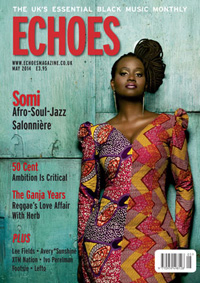 Echoes started out in 1976 as Black Echoes, a weekly newspaper covering mostly soul, funk and reggae, and became a monthly magazine in 2000, broadening its coverage to include hip-hop, jazz and R&B/pop.

JACKSON, MISSISSIPPI, has been a music town for over half a century. In the early 1950s, Lillian McMurry's Trumpet label made Sonny Boy Williamson into ...

Review by Mike Atherton, Echoes, May 2006

THE RETURN OF two legendary names from the past: Track Records, the label which gave us Jimi Hendrix and the Who, not to mention fine ...

The Dells: Originals: The Dells

THE RAYS, formed by five youngsters from Harvey, Illinois in 1952, were just one of the thousands of doo-wop groups springing up in America's cities ...

AS AN OTHERWISE unmemorable comedian used to remark, it's the way you tell 'em. It's not much of a story on the face of it: ...

THE TITLE of this striking new book is carefully chosen. Of course there was Northern Soul before the Wigan Casino and, almost 30 years after ...

The Album Cover Art Of Studio One Records (Soul Jazz)

WITHOUT STUDIO ONE there would still have been reggae music, but it might well have developed differently. ...

WHEN BOBBY BLAND'S debut LP Two Steps From The Blues crept out over here on Vogue in the early '60s, one reviewer, whether through bitchiness, ...

IN 2002, BUNNY LEE asked seasoned music journalist Noel Hawks when he was going to write up his story in book form. In the best ...

OVER THE YEARS, the mighty EMI company has come to control many American catalogues, from giants like Capitol, Liberty and United Artists to smaller and ...

BLUES HAS BEEN an integral part of popular music for decades, and this new 4CD set celebrates its birth, its growth and its ever-widening influence. ...

Review by Mike Atherton, Echoes, May 2012

THIS IS A REMARKABLE album. It captures the music of a Trinidadian dance band which, while undertaking a tour of the USA, recorded sessions for ...

AARON NEVILLE is a remarkable bloke. Muscular and tattooed, he looks like a bodybuilder or a bouncer, until he opens his mouth and sings: the ...