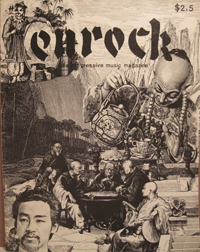 Eurock is a worldwide music promotion company founded by Archie Patterson in 1971 and specialising in European rock music. Between 1973 and 1993, is published 45 issues of Eurock Magazine were published. Currently, Eurock operates as a website.

AS AN ESTABLISHED trend of musical non-adventurism became the keynote of the early '70s, an alternative motif of sonic exploration became necessary and was provided ...

IN 1968 A mutated kind of mindset emerged in then West Germany to form a scene that turned the tide of times, after the war ...