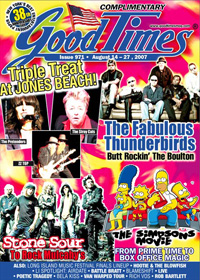 Good Times is a music and entertainment newspaper, founded in 1969 and published in Long Island, New York. USA. It is now also available online.

Neil Young: What It's Worth

NEIL YOUNG used to be number one or number two man with the Buffalo Springfield, depending on your taste; after the group broke up for ...

The Band: We Can Talk About It Now

"No matter how good David Bowie may really be, the stuff he's doing now is a lot of shit." – Chris Chesnutt, editor of the ...

The Good Rats Just Keep On Keeping On

The Kinks: The Preservation of Ray Davies

Slade: Not As Crazee As Wee Thought

WHATEVER HAPPENED to Slade, you Lawn Guyland boogie freaks may have asked yourselves lately. The answer is: Nothing – more gold records, more #1 songs ...

QUACK, QUACK: A familiar sound last summer in Santa Cruz when the Ducks were the musical hit of the town. But as the summer of ...