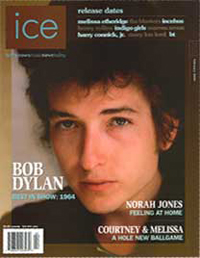 ICE magazine was a monthly newsletter/magazine published in California between 1987 and 2006, covering new CD releases.

MIKE BLOOMFIELD, Al Kooper and Stephen Stills were between gigs at the time they recorded Super Session for Columbia Records in 1968, with Bloomfield having ...

The Byrds, Gram Parsons: Going Up the Country: The Byrds and Sweetheart of the Rodeo

THOUGH OPINIONS differ on who recorded the first country-rock album, there is no question that the Byrds' Sweetheart of the Rodeo was the first one ...

Brian Wilson: Gettin' in Over My Head

WITH A RESILIENCE REMINISCENT of that battery-powered bunny or California's governor in his biggest pre-politics role, Brian Wilson is back – again. Fresh on the ...

FOR DECADES, Spencer Davis has taken heat for having named his British Invasion band the Spencer Davis Group. One critic likened it to calling the ...

Review and Interview by Gene Sculatti, ICE, May 2005

THE ARTIST who famously proclaimed It's Too Late to Stop Now means what he says. In 1974, when Van Morrison used the phrase for the ...

IT'S NOT HARD TO UNDERSTAND how a popular artist might tire of singing the words to his biggest hits after decades of doing so. Year ...

AFTER 40-PLUS YEARS, one of America's greatest songwriters finally has something to say. Which is not to suggest that songs like 'Close to You' or ...

AL KOOPER WAS surely the ultimate "super session-er" in the late 1960s – all those star turns with Bob Dylan, the Rolling Stones, Jimi Hendrix, ...

Dion: The Wanderer Walks with the Blues

IT'S A SHAME that, these days, a singer this good needs a qualifier. Until the arrival of Celine, there was only one Dion — Dion ...