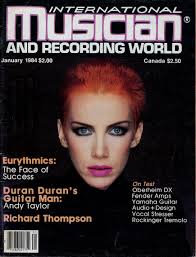 International Musician and Recording World was a UK-based magazine published from 1974 to 1991. It contained extensive interviews with many well-known rock, pop, jazz, metal & indie recording artists.

THERE ARE quite a few Americans lurking about who took their basic roots from British Rock. Do you consider yourself among them? ...

Jeff Beck: Another exclusive in which Beck reveals his true colours

JEFF BECK'S reputation as the world's greatest guitarist, the planet's most erratic musician, and the Universe's most elusive character precedes him. With a career full ...

Jon Tiven talks to Gus Dudgeon about Elton, Bowie and recording in general. ...

IN MANY WAYS, Mike Oldfield is the perfect artist to officially open the IM & RW Test Bed studio. His whole career was born out ...

'IT SEEMS MY reputation's met you before me' sang the Milky kid Bobby Vee back in the '60s. In a sense it sums up Iggy ...

HEARD THAT NEW BAND THE KINKS?That's how they like to think of themselves. And their fans feel much the same. They have only vague memories ...

STEVE SMITH is one of those comparatively rare creatures: a quiet American. No more, and quite possibly less than average height, he doesn't favour the ...

Here come the Smiths smiling, brandishing their blooms and being hotly pursued by ADRIAN DEEVOY, our very own handsome devil. ...

ADRIEN DEEVOY FINDS STRAWBERRY SWITCHBLADE TO BE MORE THAN JUST FLAVOUR OF THE MONTH ...

The man who made AOR respectable? Terry Britten confesses all to Chas de Whalley ...

The Spirit of Eden LP is both a logical step and a radical departure for TALK TALK. Andrew Smith thinks it may prove controversial... ...

The new Prefab Sprout album, Jordan: The Comeback, is a veritable potpourri of styles. Tom Doyle talks to mainman Paddy McAloon about singing, songwriting and ...