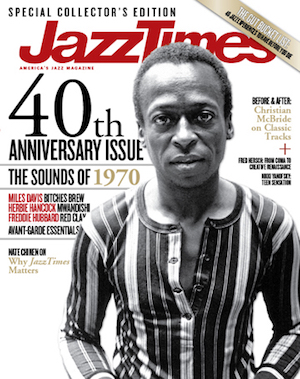 The history of the magazine dates back to Radio Free Jazz, a publication founded in 1970 by Ira Sabin when he was operating a record store in Washington, DC. It was originally a newsletter designed to update shoppers on the latest jazz releases and provide jazz radio programmers with a means of communicating with the industry. However, Radio Free Jazz grew substantially over the next decade, attracting readers and writers from around the world. In 1980, the magazine’s broader focus and appeal prompted a name change, so Radio Free became JazzTimes. In 1990, the magazine also underwent a change, receiving a bold new look that incorporated exclusive cover photography and state of the art graphic design. Since then JazzTimes has continued to evolve into what is widely regarded as the world’s leading jazz publication.

Kansas City: Sorry But I Can't Take You

KANSAS CITY, MO – It was like a scene out of The Godfather or Goldfinger, only it was on the storied corner of 18th and ...

TO UNDERSTAND the significance of Dial Records, a good place to start is the tune 'Relaxin' at Camarillo'. ...