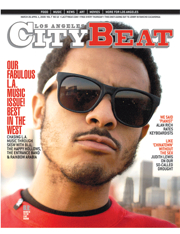 LA CityBeat was an alternative weekly newspaper in Los Angeles, California, which was published between 2003 and 2009.

The Association, Curt Boettcher: Ray of Light: The World of Sunshine Pop

ONE DAY RECENTLY, after listening to the latest Dirtbombs CD in my car and then hearing the Music Machine’s 1966 proto-punk hit ‘Talk Talk’ for ...

BACK FROM THE dead and bigger than ever! As a writer – hell, more importantly, as a reader – the Editorial We wuz turnin' cataleptic ...

OUT OF CURIOSITY and love of a good story, I've had a longstanding parlor question for jazz-minded friends on the far side of 60. What ...

HE GAVE UP writing because playing jazz seemed like an easier way to make a living.  In the era dominated by Charlie Parker, he developed an ...

HOW MANY of us wish we could have seen and heard Ellington's Jump For Joy musical at the Mayan Theatre, Charlie Parker at the Finale ...

LIVE, THE GO-BETWEENS may just be the most perfectly balanced rock band around. And it's nice to have a rare chance to witness it. Last ...

Petra Haden, The Who: She Can Sing For Miles And Miles: Petra Haden

WHEN I WAS SINGLE, I had a litmus test for first dates: If a woman could tolerate my musical taste, she was worth a second ...

THE BAR AT THE RITZ-CARLTON in South Pasadena has hand-rubbed wood on the walls and a copious amount of plush sofas and chairs. Bookcases ...

IN 1972, NOTHING sounded quite like the Raspberries' 'Go All the Way' and 'I Wanna Be With You' when they came roaring out of mono ...

EMITT RHODES still doesn’t know what hit him. Thirty years ago, he was the new Paul McCartney, an ambitious kid who craved the perfect pop ...

WHEN BRUCE Springsteen slipped into his Baptist-preacher mode and acknowledged E Street Band members at the Forum in Inglewood last year, he concluded his round-robin ...

At Paul Westerberg’s show, rock energy and stage entropy wrestle to a draw ...

Hal Willner and the Creation of the Modern Tribute Album

"SORRY," Hal Willner says, sheepishly. He has just been complimented — or so this writer intended — for being the father of pop culture's rampant ...