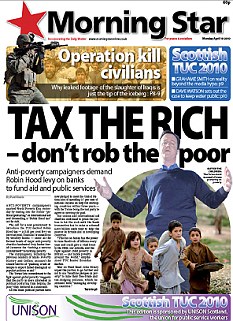 Morning Star is a left-wing British daily tabloid newspaper with a focus on social, political and trade union issues. The paper was founded in 1930 as the Daily Worker by the Communist Party of Great Britain (CPGB). Since 1945, it has been owned by the People's Press Printing Society. It was renamed the Morning Star in 1966. The paper's editorial stance is in line with Britain's Road to Socialism, the programme of the Communist Party of Britain. Articles and comment columns are now contributed by writers from socialist, communist, social democratic, Green and religious perspectives.

Garth Cartwright: Going For A Song

THE RETURN OF the vinyl album and record fairs teaming with "pre-owned" albums, 45s, CDs and even 78s has generated a new interest in the ...

GROWING UP in the early 1960s in Manchester, with grandparents living in Moss Side, the infectious music of bluebeat and ska records newly imported from ...

THOUGH HE only made 40 recordings, US blues artist Robert Johnson's legacy has endured for over eight decades and his songs are now part of ...

THE CONNECTION between blues music and the African continent and how African slaves carried their music to the Americas has been well documented for almost ...

Jack Bruce: Sunshine Of Your Love: A Concert For Jack Bruce

IN 2015, A DAY before the first anniversary of his death at the age of 71, an all-star cast of musicians gathered at London's Roundhouse ...

FIFTY YEARS AGO, Frank Zappa declared (after Edgar Varese) that "the present-day composer refuses to die". How true, and half a century on from the ...

MANCHESTER'S FREE Trade Hall was built on the site of the 1819 Peterloo massacre as a public hall celebrating the repeal of the Corn Laws ...

SIX YEARS in the making, this download-only release consists of 100 tracks – all originally issued on 78rpm discs with a 186-page beautifully illustrated book, ...

JOHN MAYALL turned 87 recently, and the Godfather of the British Blues – a national treasure – has a new 35-CD box set out featuring ...

DURING THE 1960s British R&B boom the Pretty Things were the band the UK press loved to hate.  Lead singer Phil May's shoulder-length locks were ...