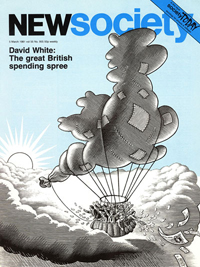 New Society was a weekly magazine of social inquiry and social and cultural comment, published in the United Kingdom from 1962 to 1988.

The arts in society: You're Sick, Daddy

2018 author's note: My very first published piece, written for New Society, of which I was a founder-member of staff as the sub-editor and production ...

MOST WRITERS on popular music and the blues have approached post-1955 music with discomfort, concluding their books with despondent remarks about the commercialised depravity called ...

2012 note: Cometh the hour... Paul Barker, the second and last editor of the UK weekly journal New Society, was once asked to speak on ...

A world turned upside down ...

2018 author's introduction:  This was the third rock concert filmed by Granada Television for the UK national network in 1968 and 1969, the first two ...