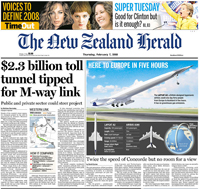 The New Zealand Herald is a daily newspaper published in Auckland, New Zealand. It has the largest circulation in the country, and is available in an online edition.

Warren Zevon: Tales from the Dark Side

THE VARIOUS ENCYCLOPAEDIAS of rock don't do justice to Warren Zevon. He got a snippy microscopic reference in the 1991 New Illustrated Rock Handbook ("well-established ...

Profile and Interview by Graham Reid, The New Zealand Herald, 1994

AT 55, ASTRID Kirchherr still loves rock music and listens to it every day: The Beatles, the Doors, Bowie... "and Prince, he's such a genius ...

Report and Interview by Graham Reid, The New Zealand Herald, May 1994

HIS LETTERS back home don't tell the whole story. But such letters seldom do. He says there are plenty of girls "but none of us ...

New Yorker Bob Gruen is famous in the field of rock'n'roll photography but his association with John Lennon overshadows everything. GRAHAM REID hears the stories. ...

Steve Earle: Rebel With A Cause

Country rock rebel Steve Earle has turned his back on cocaine and booze and talks to Graham Reid about politics and music ...

SILVIO DANTE, Tony Soprano's loyal soldier and owner of the famous Bada Bing strip club, is in the lobby bar of a Sydney hotel and, ...

Steve Earle: Proud to be an American

STEVE EARLE'S career has been one of the most extraordinary in American music. He crashed into country music with his 1986 classic rockin' country album ...

FOR SOMEONE WHOSE stark songs sound like they have come from the impoverished rural underbelly of Depression-era America, Gillian Welch seems as lively as a ...

BEFORE HE WAS 21 Jimmy Webb had already written some of pop's most enduring songs, including 'By The Time I Get To Phoenix' (which Frank ...

EVEN JOE COCKER finds it amusing he should be staying in his hotel in Denmark under an alias. After all, he's hardly fan-bait as a ...

STEVIE NICKS – the fairy queen singer in Fleetwood Mac – is in a Melbourne hotel room ready to go off to another rehearsal. In ...

Adrian Sherwood is feeling the riddim

NOT MUCH reggae music came out of the Home Counties during the early 1970s, but an awful lot went in. More than you might think. ...

As the Rolling Stones prepare to bring their 50th anniversary celebrations to Auckland, guitarist Keith Richards talks to Graham Reid. ...

Rosanne Cash: The River and the Thread

ONE OF THE LAST songs Johnny Cash recorded was the moving 'September When It Comes' with his daughter Rosanne for her 2003 album Rules of ...

TRANSVISION VAMP were one of those British bands who got through the door in the post-punk/New Wave era, but didn't quite know what to do ...