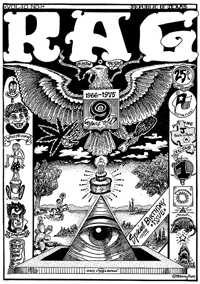 The Rag was an underground newspaper launched in Austin, Texas in 1966, and published until 1977.

Rock Has Nowhere To Go But Up

AH, IT'S GREAT to be living in these days of "progressive" rock. Or so the record companies, hip record stores, and groups themselves would have ...

I'M REALLY glad a final Jimi Hendrix album has finally come out, as it adds to the domain from which to consider the exceptionally puzzling ...

CHARLIE RICH from Colt, Arkansas, came out in the mid-50's with a voice and delivery very similar to that of Elvis Presley's early Sun style, ...

A FRIEND OF mine came over about three weeks back to play me this killer new album he said he’d gotten. So, sure, I said ...

IN KEEPING with our Rag policy of bringing the hottest platters straight to you, kats and kittens, so's you can be up on the newest ...

GRAND FUNK HAS been the most important band in the land for the last year, which you’re probably aware of anyway. Grand Funk in concert ...

ENOUGH'S BEEN written about the Beach Boys' comeback to choke a horse, and 99% of it has been rubbish. The Beach Boys have been putting ...

THERE ARE four remaining survivors from the English Invasion: the Kinks, the Hollies, the Rolling Stones, and Van Morrison. All four of these have wound ...

MOST PEOPLE LISTEN to rock and roll. Yet others read about it, and some actually have the lunacy to write about it! Where there’s money ...

FANNY HAVE put out a totally consistent album that captures the spirit of 1964-5 rock coupled with the White Album Beatles/middle-period Badfinger instrumental sound. Considering ...