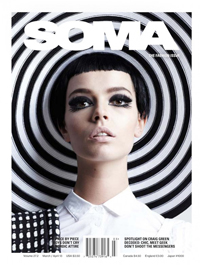 Launched in San Francisco in 1987, SOMA is a bi-monthly magazine covering avant-garde arts, fashion, culture and design. It is also available online.

ONCE, HE was the bespectacled singer of archetypal British guitar band The Smiths; now he's living in Los Angeles and shopping for a label. ...

PETER MURPHY. Once the man who forced glamour and dread into its permanent cage match, he's now become the dark bard of Istanbul. ...

IT'S NOT EASY being an "it" girl, especially when most of those proclaiming it have little clue as to what "it" is. Most often, "it" ...

"You know how I know it's the end of the world, Lenny? Because everything's been done. Every kinda music, every government, every hairstyle. How we ...

Carla Bruni: The Literary Ambitions Of A Model

THERE WAS a t-shirt going around a few years ago which snottily declared of its wearers, I Hate Models. Of course, it said way less ...

NEW YORK'S hideously hypocritical smoking policy (in a city choking on exhaust fumes) was a particular nuisance that morning at the impossibly fabulous Carlyle Hotel, ...

IT'S HARD TO recall a time when the scent of Armageddon has hung so heavy in the international air as it has during this, the ...

The Raveonettes: Good Things Come To Those Who Wait

THEY WERE a glorious sight, appearing gorgeously on the horizon. Modern day Vikings, they came from the land of Hamlet, pastry and strikingly progressive politics ...

IN AN AGE of insufferably style-less, beardy bores like Fleet Foxes and Band of Horses, when the gloriously outlandish and confrontational likes of Dresden Dolls ...