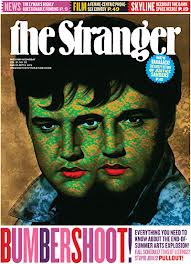 Founded in 1991, The Stranger is an alternative weekly newspaper in Seattle, Washington, USA.

Interview by Everett True, The Stranger, 1999

CONFESSION: I never liked the Posies. Felt they were too much in thrall to the sweet, spiked pop of Big Star. Disliked their skinny ties ...

THE FOLLOWING are excerpts from a conversation that took place in a hotel room in Seattle, last December after the Hole concert at KeyArena. No ...

I'M NOT DENYING she has looks, and talent, and a silky-smooth voice which can seduce even the most cynical listener. ...

PRIMAL SCREAM is back. The band that released the pivotal U.K. album of the '90s (Screamadelica) and outraged and amused generations of fans with their ...

THE STRANGER'S cantankerous former music editor Everett True recently returned from London to revisit his salad days in Seattle. Herewith is the record of his ...

ROBERT POLLARD HAS fronted slanted 'n' enchanted prog-punk bubblegum merchants Guided By Voices for two decades, and writing songs, he claims, "since I was eight ...

Retrospective and Interview by Everett True, The Stranger, 15 August 2002

*Not-So-Frequently-Asked Questions About One of Seattle's Best and Most Enduring Rock Bands. A Primer ...

"THE FIRST TIME you take acid, or have any kind of a psychedelic experience, from that point on you look at the world a little ...

Guided By Voices: Fading Captain: Guided by Voices Head Into The Sunset

GEARING UP FOR what will be his last tour with the band that won him his unlikely fame, Robert Pollard is in a reflective mood. ...

Nirvana: With The Lights Out (Geffen)

POSTHUMOUS RELEASES FROM from departed artists often flail to do the impossible – to provide the music so violently and abruptly silenced by, say, Jeff ...

"I SAW THIS documentary about a classical guitarist," Jack White told me recently. "He was playing Bach and Mozart, these really ridiculously complicated pieces, but ...

Dinosaur Jr: Back From Extinction: Dinosaur Jr And The Annals Of Indie-Rock

FUNNY HOW THINGS change. Only a year ago, the idea of Dinosaur Jr.'s J Mascis and Lou Barlow burying their legendarily blood-splattered hatchet was laughable. ...