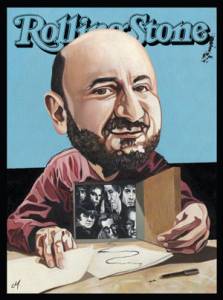 Anthony DeCurtis is a contributing editor to Rolling Stone, and he also writes for The New York Times and other American publications. He has published two collections of his writing: In Other Words: Artists Talk About Life and Work (Hal Leonard) and Rocking My Life Away (Duke University Press). He teaches in the writing program at the University of Pennsylvania.

GARTH BROOKS is a regular at the Pancake Pantry on Twenty-first Avenue in Nashville. When he arrives for breakfast, the proprietor greets him at the ...

THE TITLE TRACK of Jackson Browne's second album, For Everyman, was a response to the escapist vision of Crosby, Stills and Nash's 'Wooden Ships'. As ...

American Dream fades out on the line "Why not keep on singing anyway?" – and that lackadaisical slogan seems to sum up the spirit in ...

On his first two solo albums (I Can't Stand Still and Building the Perfect Beast), Don Henley made yearning his great theme. Something had disappeared ...

Whitney Houston: Down and Dirty

YOU'RE EXPECTING her to float delicately into the room, but Whitney Houston strides in with a purposeful air. She's dressed way down in purple stretch ...

Recorded before he turned 21, Off The Wall made him a superstar — and the most important young R&B artist in America. ...

With her last album, Janet declared her independence from her famous family. Now, on Rhythm Nation, she's stepping out and dealing with the real world ...

SWEAT-SOAKED and sprawled on a couch in the dressing room of Atlanta hot-spot 688 club, Scorcher guitarist Warner Hodges pulls on a cold one and ...

Flying Cowboys simultaneously bears the distinctive mark of Rickie Lee Jones's wild, unruly talent and continues the steady process by which her art is achieving ...

The Kinks: Ray Davies: Rocking My Life Away

EIGHTEEN-YEAR-OLD LIL' WAYNE, one of B.G.'s fellow Hot Boys (along with Juvenile and Young Turk), has followed up his blinging '99 debut, Tha Block Is ...

"EVERYTHING WAS A SONG," Curtis Mayfield once said. "Every conversation, every personal hurt, every observance of people in stress, happiness and love ... if you ...

"HE WAS A hero to me," David Crosby said of singer-songwriter Fred Neil. But when Neil died of cancer on July 7th at the age ...

IN A FRIGHTENING WAY, the current hip-hop scene recalls the end of Goodfellas: The major players are turning up dead, heading off to prison or ...

Prince: The Artist Formerly Known As

Prince has dumped the "glyph", reverted to his real name, expunged the profanities from his set-list and now apologises for his past megalomaniac excess — ...

NEW YORK is Lou Reed's rock & roll version of The Bonfire of the Vanities. But whereas Tom Wolfe maintains an ultimately cynical distance from ...

R.E.M.: Rock Criticism and the Rocker: A Conversation With Peter Buck

Book Excerpt by Anthony DeCurtis, Rocking My Life Away, 1998

IN SEPTEMBER 1994 R.E.M. guitarist Peter Buck kindly took time off from promoting R.E.M.'s Monster to do an interview with Anthony DeCurtis, who wanted an ...

Lionel Richie: Dancing on the Ceiling

Lionel Richie will never surprise you. His triumph has been his ability to turn conservative dependability into a commercial, and at times even an aesthetic, ...

VIOLENCE OF both sexual and political nature is never more than a shout away on Undercover, the Rolling Stones' first studio LP since 1981's much ...

After getting clobbered by critics for Capeman, Paul Simon returns to folk-rock form with You're The One, an upcoming tour, and a few choice words ...

His album The Rising dealt with life after 9/11. His world tour confronted the realities of war ...

Nothing Like The Sun – a powerful, often hypnotic album that blends jazz and rock styles into a thoughtful suite of twelve songs about love, ...

"LIVE, LAUGH, LOVE, but through it all, forgive"; "Let's not compare ourselves to others"; "You are your own garden"; "For God's sake, teach people to ...

Flirtations with Chaos: The Life and Work of Robert Palmer

NOTE: This is Anthony DeCurtis' introduction to Blues & Chaos, his 2009 anthology of Bob Palmer's work. * ...