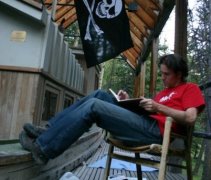 Chris Smith is the author of five books and hundreds of articles in magazines such as Rolling Stone, Men’s Journal, and the Tyee. He now teaches cultural criticism at the University of British Columbia, and is the founder of the Canada Party and author of America, but Better: the Canada Party Manifesto.

Tori Amos: The Loudest Voice in the Chair

My scream got lost in a paper cup you think there's a heaven where some screams have gone?I've got twenty-five bucks and a cracker do ...

A MENTOR ONCE told me there were two rules to writing about other people's lives: First, always remember that as the journalist, you're not the ...

IF YOU'VE EVER visited Graceland in Memphis, Tennessee, one of the most memorable legs of the tour (not quite as touching as the meditation garden ...

Mary Gauthier: The Darker Side of Dixie

MIDNIGHT HAS LONG since passed, and we're sitting in the dim alley behind the legendary Club Passim in Harvard Square in Cambridge, Massachusetts. The fire ...

Ms. Gauthier talks about her road from a tricky childhood, via addiction and alcoholism, to her place as a songwriter: ambition vs. self-destruction; her community of outsiders; the meaning of truth; her move to Boston and running restaurants; doing her first open-mic nights, and all about songwriting.

AH JANIS. OK, so you gave us an alternate spelling for 'cosmic,' helped corral all the hippies into San Francisco, proved white people can sing ...

BRIAN KENNEDY is caught between a pillow and a soft place. On the one hand, he's an emerging solo artist whose debut album in 1990 ...

We start with Smith's second attempt at interviewing Martyn: the Scottish bard on his covers album The Church of the One Bell; on starting out as a musician; on his influences such as Davey Graham and the impressionist composers; on writing 'Solid Air' for (and about) Nick Drake. Following that, we present Smith's first attempt at the interview, in which a soused Martyn slurs about impressionism, drink and religion, and tells incomprehensible jokes.

Meat Loaf: The Meat Goes On

"BITCH TITS." That's the first thing that comes to mind whenever we think of Meat Loaf anymore. ...

THERE WAS, of course, Texas music before Willie. Problem was, nobody outside of Texas heard it. The eclectic styles growing from lone star roots before ...

The outlaw-country icon talks about what makes Texas such fertile ground for songwriters and musicians; about his discovery of the Austin scene; his early years as a writer in Nashville, and pitching 'Crazy' to Patsy Cline; the struggle to break through as an artist, and at some length about songwriting.

Sinead talks about "de-Enya-ing" her first album; her new album of traditional Irish songs Sean-Nós Nua; her love of American music; the cultural benefits of ethnic immigration into Ireland; the current state of Irish music; the difference between performing her own songs and covering others'; collaborating with Massive Attack and, possibly, Buju Banton!

IT'S APRIL, 2048, the year of the cockroach. The lines curve out the door of Radio City Music Hall, around the block, and down Sixth ...

DESPITE HIS UNPARALLELED folk-blues guitar work, a voice that seems to channel ancient, Appalachian spirits, and near-legendary status in folk-circles, Chris Smither has never been ...

STEVE EARLE ONCE gushed, "Townes Van Zandt is the best songwriter in the world, and I'd stand on Bob Dylan's coffee table in my boots ...

SUMMING UP ALAN LOMAX'S contributions to folk music in a single magazine article is like trying to list everyone you've ever met on a single ...

IF YOU HAD said to someone twenty years ago that Ireland was hot, they would have assumed you'd never been, because, truthfully, the place is ...