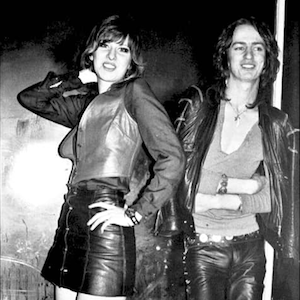 Before she formed the Pretenders and became one of rock's great female icons, Chrissie Hynde (pictured with then-beau Nick Kent) wrote for NME and other '70s music mags.

...and had a simply devastating effect on the glands of a certain Chrissie Hynd [sic]. ...

Brian Eno: Everything You'd Rather Not Know About Eno

IT WAS WITH a certain apprehensive curiosity that I first noticed the brown lace-up shoes. He displayed a normalcy that I just couldn't trust. After ...

IN TERMS of the rock machine they were chronologically burned out from the start. Who but a pack of literary looneys could have survived falling ...

WHEN YOU'RE sitting in a trailer at 2 a.m. somewhere out in 'Last Stopsville', and there's just you, one more hit of apple wine, the ...

Suzi Quatro: A Rap In The Loo With Suzi Q.

CHRISSIE HYND, who's got this thing about black leather, snuggles up to SUZI QUATRO for an intimate girl-to-girl tête-à-tête in the Ladies' toilet ...

IT'S SATURDAY NIGHT. I'm alone and all I don't wanna do is keep leafing through this copy of Vogue I got in my mits - ...

"In the Sixties our motto was: never trust anyone over 30. It was all about youth — and youth was a huge threat", by Chrissie ...