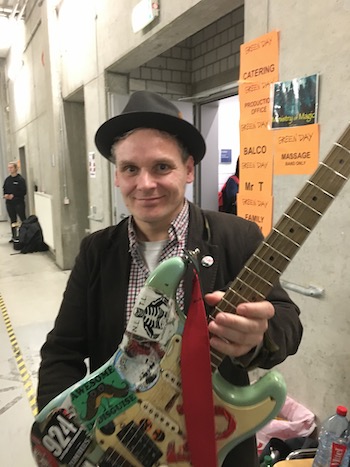 Kate Bush, Peter Gabriel: "You still have us": how Peter Gabriel's 'Don’t Give Up' became a lifeline for the lonely

IT IS ALMOST eight years since the video clip for 'Don't Give Up' first appeared on YouTube. Written and sung by Peter Gabriel, and featuring ...

Chumbawamba: How 'Tubthumping' shook the world

IN 1997, OUT OF NOWHERE the English anarchist punk band Chumbawamba sold more than five million albums. In attaining triple-platinum status, in the United States ...

Alice Cooper, Lemmy: A Walk on the Wild Side of Sunset: Remembering Lemmy and the Hollywood Vampires

Foo Fighters — "Us or Nirvana? I'm prouder of us!"

DAVE GROHL IS SITTING in a spacious room with his band the Foo Fighters. They're seated in a ragged semi-circle, and at the moment the ...

Nickelback: My five-year feud with Nickelback

The band sent me flowers for my funeral, then challenged me to a fight. None of it caused me as much pain as their music. ...

Four men from northern Sweden are giving The Hives a run for their money in the incendiary rock 'n' roll stakes. But selling records is ...

Forged in South Africa, the 1986 masterpiece drew accusations of 'cultural appropriation', offence and theft. What were Simon's intentions? ...

Farewell to Kerrang!, the lone champion of working-class metalheads

IN THE FIRST decade of the 21st Century, the British rock magazine Kerrang! ran a small weekly item called "Stimulants". Secreted away at the bottom ...