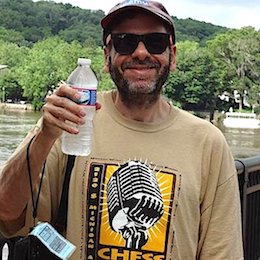 Jason Gross is a freelance writer in New York City who's contributed to All Music Guide, Blender, Creative Loafing, Harp, Film Comment, MOJO, No Depression, Spin, Time Out, Tracks, Village Voice and the Wire among others. He is the editor/founder of one of the first online music magazines, Perfect Sound Forever (perfectsoundforever.com, since 1993).

His work has also been published in a number of books including Rock and Roll Is Here To Stay, Musichound World: The Essential Album Guide, Rock - 100 Essential CD's and Rock: The Rough Guide and The Beat Generation. In April 2000, Ellipsis Arts released OHM- the Early Gurus of Electronic Music, a 3-CD compilation he co-produced of historic material in that field, praised by the New York Times, National Public Radio and many other places. Reissues that he has produced include albums collecting the work of Oh OK (Collectors' Choice), DNA (No More), Kleenex/Liliput and Essential Logic (both on Kill Rock Stars)- he is currently working on several similar projects.

PSF: WHAT WAS the local scene like before the group started? ...

IT'S HARD NOT TO praise someone who's a pioneer and a star in techno/electronica — that's just Richard D. James (aka Aphex Twin) for you. ...

SEEMS LIKE A long strange trip for a band that started as a hardcore unit in 1980 to become a bestselling rap trio for a ...

A sixty-plus-year-old gospel group that covers Tom Waits and the Rolling Stones songs for Peter Gabriel’s label? Is it possible? When most groups struggle to ...

THOUGH CAROLINA-to-Hoboken legends the dB's already had their first reunion gigs at Maxwell's in Hoboken last fall, this Gotham show was their big coming-out party, ...

Drive-By Truckers: Confessions of a Trucker

TRYING TO FIT in as the newbie in an established band is a weird, awkward, disorienting task – just ask Ron Wood what it was ...

AS ANOTHER SXSW drew to a close on an abnormally cool Texas afternoon, a roaring half-hour thunderstorm presaged one of the most unexpected comebacks in ...

IN 1977, A bunch of British university students formed a band, poignantly deciding to take the name of a group of disgraced communist leaders accused ...

WHO IS ROBERT Quine? According to him, he 'remains one of the most compelling, appalling and universally hated figures in music history.' ...

The High Dials: War of the Wakening Phantoms

IN THE quirky, removed Northern climes of late-'70s Montreal, Trevor Anderson grew up on a diet of folk and country music. More than a dozen ...

Jon Langford, The Mekons, The Waco Brothers: An Interview with Jon Langford

Interview by Jason Gross, Bangsheet, May 1999

IN THE MIDDLE of yet another tour for the alt-alt-country act the Waco Brothers and on hiatus from his original band the Mekons, Jon "Boy" ...

WHAT DO YOU say about a great lost voice in a band that was worshipped by Jim Morrison and Robert Plant? Though he was second ...

SITTING ON A back porch in bucolic Western Massachusetts on a gorgeous summer's day, my friend’s adorable little daughter coyly asked, "Wanna see a picture ...

IF ANYTHING, folkie singer/harpist Joanna Newsom's recent live shows with strings answer the question of whether her new music (featuring 10-15 minute songs) is ambitious ...

ARE THERE ANY active old-school divas that we can still look up to? Cher? Retired. Tina Turner? Retired. Barbara Streisand? Her too. Joni Mitchell? Yep. ...

The Roots: They're A (Funky) American Band

"WHAT KIND OF music do they play?" a Def Jam receptionist innocently asked, when queried about the Roots. Although self-classified as a rap group, the ...

THE MOST part of the whole wave of CD reissues is seeing these obscure gems that you're positive no one else could possibly care about ...

After a summer tryout at London's Meltdown Festival, punk icon Patti Smith returned to her NYC roots to perform again in sequence her 30-year-old debut ...

IN THE WAKE of the success of the Coen Brothers'/T-Bone Burnette's O Brother, Where Art Thou, you'd surely hope that some people would be curious ...

2003 NOTE: WHILE IT'S commonplace now for artists to put their material up for fans to preview, it wasn't three years ago, which should show ...

THOUGH THERE'S BEEN hundreds and thousands of hotshots who vowed to take the guitar to the next level after Jimi Hendrix broke the doors open, ...

Andrew WK: I Get Wet (Island)

THIS 20-YEAR-OLD NYC headbanger gets the nod from David Grohl (Nirvana/Foo Fighters), gets his bloody nose record cover (coke blow? fist fight?) banned and gets ...

A Top 40 Countdown & A Plea For a Mitzvah in the Streaming Age: The Best Music Journalism of 2018

2018 WAS A really good year, just not politically, socially, psychologically and spiritually... well, there was plenty of good music, as Fader, Consequence of Sound ...

The Best Music Journalism Of 2016

WE WANTED 2016 to end and we're getting our wish, but the fallout from this awful year will be haunting us for a while – ...

The Dean of Rock Critics Schools Us On Himself: Robert Christgau's Going Into the City (Dey St.)