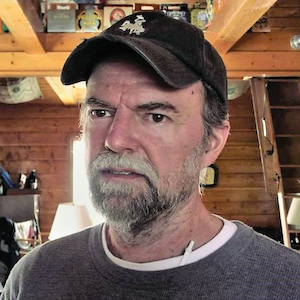 Joe Carducci was born in Merced, California in 1955.  He grew up in Naperville, Illinois, attended the University of Denver for a year and a half before quitting to write, first moving to Chicago in 1975, then to Hollywood in 1976.  He was first published in The Match! and Eurock.  Occasionally he posts at the New Vulgate blog.

Carducci co-founded Systematic Record Distribution in Portland in 1978.  As Rough Trade’s American outlet, it moved to Berkeley at the end of 1979 to pave the way for RTUS.  There he also was involved in the Thermidor label (ONO, SPK, Birthday Party, Toiling Midgets...) and Optional Music (Dead Kennedys, Voice Farm, Negativland…).

Carducci moved back to L.A. in the fall of 1981 to work with Black Flag on their label SST Records until 1986.  Back in Chicago he wrote Rock and the Pop Narcotic, started Redoubt Press to publish his writing in 1990, (a revised edition appeared on 2.13.61 Publications in 1985), and began the Provisional company for the release of films on videotape including work by Raymond Pettibon, James Fotopoulos and others.

While on the West Coast, Carducci did the first punk radio show in Portland on the Pacifica station KBOO; he later appeared regularly on KPFA in Berkeley, and in Chicago he produced a program on WVVX.  He now appears occasionally on WFMU in New York.  Carducci has lived in Wyoming since 1996.

Joe on the RBP podcast

Author's note: All Tomorrow's Parties had the Meat Puppets playing their second album in 2008, and I was asked to write about that album for ...

Paul Nelson: First You Dream, Then You Die

Author's note: I'm not in the reviewing game at The New Vulgate,but David Lighthourne had introduced me to Paul and told me about Kevin Avery's ...