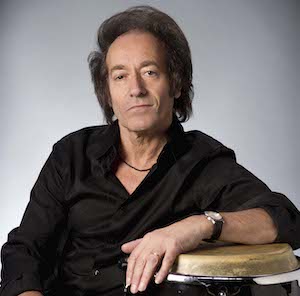 Jon Newey has juggled being a musician and music press staffer for the past 50 years. Prior to joining Sounds music paper in 1977, Newey had toured as a drummer/percussionist in psychedelic-funk band Crew from 1971 before forming England's Glory with Peter Perrett in 1973 and recording The Legendary Lost Album, before they broke up and Perrett later formed The Only Ones while Newey joined Bandana with Charlie Harper, later of UK Subs fame.

While with Sounds until it closed in 1991, Newey covered the musical instrument/musician pages and also played percussion with Jabba (ex-Cymande) as well as reggae and indie sessions, including Nick Kent's Subterraneans single 'My Flamingo' and still unreleased 1980 album for Demon Records. Following Sounds closure Newey ran Tower Record's TOP magazine and edited the Tower Records Jazz Guide. In 1997 he was one of the founding writers at Jazzwise magazine and took over as editor in 2000, becoming editor in chief in 2016. He was named Jazz Journalist of the Year at the Parliamentary Jazz Awards in 2006 and 2012 while Jazzwise has won numerous Jazz Publication of the Year Awards, and in 2014 he was made an Honorary Associate of The Royal Academy of Music for Services to Jazz.

Newey has also written for Jazz on CD, Jazz Express, Jazz At Ronnie Scott's, Rhythm, Mojo Collections, Record Collector and Flashback, and written numerous album and DVD sleeve notes, including Jeff Beck, Charlie Watts and Charles Lloyd titles, while his first book, The 100 Jazz Albums That Shook The World was published in 2022. Musically still active, he has recorded and played with Chris Jagger's Atcha, and is currently percussionist with Latin-jazz band, J-Sonics.

Rolling Stone Charlie Watts is not a typical jazz drummer. His previous solo albums have touched on the legacy of Charlie Parker and his new ...

BASSIST Alphonso Johnson always stood in the huge shadows of Jaco Pastorius and Stanley Clarke back when jazz-rock groups strode the planet in the mid ...

All at sea: Jazz Party at Sea

Jazz gets a life on the ocean waves. ...

Where's the Love In, man?: The mystery of London's legendary lost Love In Festival of 1967

In July 1967 the biggest gathering of psychedelic groups ever held in the UK up to that point took place at London's Alexandra Palace right ...

Pressed rolls and warthog: The life and times of Ginger Baker ...

From early 1960s gigs with Terry Callier and having a song covered by Miles Davis to latter-day collaborations with Snarky Puppy and Steely Dan's Donald ...

Fifty years ago this month Miles Davis played the biggest gig of his career when he brought his groundbreaking Bitches Brew band to the 1970 ...

Hammond B3 honcho "Baby Face" Willette kicked off the early 1960s as a promising new Blue Note label signing in the wake of Jimmy Smith's ...

The gentleman of rhythm calls time ...