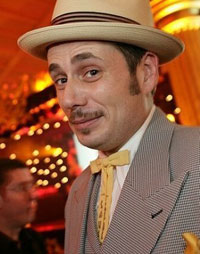 Joss Hutton was spawned near Leicester, in a small village, and received a thorough rock’n’roll baptism from two cousins – a former secretary of the Booker T fan club, and a fan of Nuggets, the MC5, The Ramones, The Saints, The Kinks and The Yardbirds.

Thus doomed, and imbued with the spirit of such early interviewees as Steve Marriott ("Send me any more questions and I’ll throttle you, ya c*nt! Love, Steve.") and Billy Childish (Q: What colour socks are you wearing? A: "I’m not wearing any socks."), the underachieving hick’s teen years saw him publishing fanzines (Pandora's Box), running a successful club night (ditto), and promoting gigs (The Thanes, The Beatpack, etc). Unsurprisingly, Joss spent most of his school years looking out the window, wishing he was in the Pretty Things, and so ended up working in a doorknob factory. However, a chance encounter with a genuine Ramone at Leicester bus station soon gave him the courage to recklessly reject a glowing future in architectural ironmongery, and he fled to London to join a retarded teenage beat combo.
Between gigging around the UK and Europe, Joss found time to run another loud and lewd club night (The Purple Turtle), plus a record label (Merry Go Round), which released the first musical fruits from the world-famous Toe Rag Studios. He also occasionally dressed up as a chicken (and other exotic beings), to help out maverick promoter and filmmaker Josh Collins at his Frat Shack events.
Joss then led nasty-assed Dictators-style punk combo Problem Hair, who so annoyed a certain eager A&R drone with their hysterical laughter at the idea of being on the same label as Leo Sayer, that he ended up telling his quarry to "f*ck off". Problem Hair's album, Slightly Floored, was released on the German label Teenage Kicks during 1994, to no avail and little acclaim.
Joss's next task was to marshal a new editorial team for legendary mag Bucketful Of Brains, which they successfully re-launched during 1995. His tenure at BoB saw him comprehensively profile the likes of Dan Penn & Spooner Oldham, Dr John, Matthew Sweet, Andre Williams, Red Kross, Sparklehorse, Teenage Fanclub and Jim Dickinson.
Joss wrote weekly pieces for the Guardian Guide for nearly a decade, but his tenure with Kerrang!, The Face and X-Ray was far shorter, and morally crippling, involving the type of know-nothing, self-aggrandizing twonks that he’d always studiously avoided. Having gracefully withdrawn from paying music journalism, Joss continues to work as an editor, and as an occasional writer for RBP, the I-94 Bar and Perfect Sound Forever.
Joss also proudly co-ran London’s superlatively rockin’ Sonic Reducer club nights for several years, alongside TeenSlain (Silver Chapter/Zero Willpower), which attracted such guest DJs as Michael Davis (MC5), Chris Bailey (The Saints), Tim Rogers (You Am I) and Ben Ayres (Cornershop). Under the moniker of the Sonic Reducer Tag Team, the duo also served as The Detroit Cobras’ tour DJs, and enlivened gigs by the likes of Big Star, DKT-MC5, Arthur Lee & Love, Radio Birdman, The Soundtrack Of Our Lives, The Vines, Andre Williams, You Am I, and Panther Burns. Sonic Reducer even attracted Raymond Douglas Davies as a paying customer – TWICE – and had the pleasure of watching The Kinks' linchpin jig around to Lazy Lester 45s, proudly claiming "I covered this!"
Joss remains an indolent sot with few regrets, and claims to divide his time between Bath and Memphis, yet spends the majority of his time smoking and laughing at cats, when not playing gigs with 'tits'n'twang' combo The Stripchords (www.myspace.com/thestripchords). Joss and his wife, Nadia, were the first people to get married inside Sun Studios, Memphis during April of 2005, and relocated from 'the London' to Somerset during the autumn of 2006, where they reside happily with their accumulated kibble, a 1940s kitchen made out of Spitfires, and three black'n'white cats. Joss's latest musings and music can be found via www.myspace.com/bigkegshandy.

THIS MAIN COURSE is a hearty southern dish, marinated in worldly wisdom and good humour, matured slowly in honky-tonks, recording studios and bars the world ...

Clinic: The Only British Band Which Matters

The Datsuns: The Big Noise from Down Under: The Datsuns

THE UK SEEMS to be going underground rock ‘n’ roll ker-razy at the moment, what with the success of The White Stripes and The Hives, ...

Dr. John: The Return Of The Native: A Conversation With Dr John, The Night Tripper

The Hives: Stronger Than Dirt: The Secret History Of Garage Punk

Dan Penn and Spooner Oldham #1: "Spend A Little Time With The Old Folks"

Joss Hutton shoots the breeze with the living legends behind some of Soul's greatest, Dan Penn and Spooner Oldham. ...

I said to a friend of mine "Hey, great! Redd Kross have got a new album coming out!"She said "The girl band?" ...

YOU'VE PROBABLY read quite a lot in the music press – over the past six months or so – about Sparklehorse's songwriter, guitarist and vocalist ...