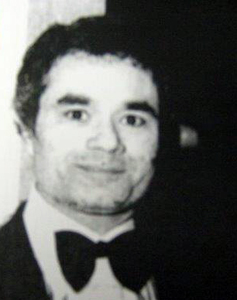 "In the 60's I started working for the Record Mirror interviewing lots of up and coming artists. Most artists I interviewed were significant because it was the start of their musical journeys and establishing themselves as world class artists.

I first got into doing music interviews with the encouragement of my mate Johnny Worth whom was arguably Britain's "Best Song Writer"! He wrote for the Shadows, Petula Clarke, Marty Wilde, The Dallas Boys and especially Adam Faith.

He wrote all his hits notably 'What Do You Want If You Don't Want Money?' which won him the coveted Ivor Novello Award. He used to be a singer in the Oscar Rabin Band, in which he became part of a successful group called the Raindrops. They use to consist of Jackie Lee, Lea Beadle, Vince Hill and Johnny Worth.

When I was younger, I lived in Liverpool and one of my best friends was Tony Jackson. There was a pop group started by him called The Searchers, which I never suspected was the same person that I grew up with.

I had to go and interview The Hollies in Oxford and on the supporting act was Tony Jackson and the Vibrations. As his dressing room was next door to The Hollies and I had travelled a long way I decided to take a chance and check him out to see if he was the same guy I grew up with. I knocked on his door and when he turned around without hesitation said my name. I had not seen him in over 20 years. When I mentioned this situation to Ringo Starr in an interview he was amazed that he remembered me after all those years.

In my career I met with Brian Epstein he considered offering me a position in his agency doing management but sadly he passed away before this went ahead. That was a sad loss.

As my full time career was in financial services I had many famous people as my clients whom I admired and respected. Though I had opportunities to continue progressing in the entertainment business my full time career really took off in a big way and I left it after 35 years to take early retirement. I still have great memories of the wonderful interviews I did and at a time when music was changing with excitement with new innovation and creativity."

ALTHOUGH the Beatles are continually quoted and misquoted, interpreted and misinterpreted, they don't really mind what is said about them. ...

Brenda Lee: Brenda And Her Baby

WHEN SHE isn't rocking up a storm "on stage", Mrs. Charles Shacklett nee Brenda Lee — or Miss Dynamite if you prefer, is rocking the ...

The Dave Clark Five: Of Course I'm No Krupa

"IS YOUR image slipping," I enquired of Dave Clark during our chat prior to his colossal American tour. There is an impression around that Dave ...

Elvis Presley: The Facts About Elvis

The Hollies: Chat Time With the Hollies

THE CYNICS are going to say: "Oh not again...!" For the consistent chart riding Hollies are echoing Manfred Mann like phrases. ...

DID JOHNNY Mathis burn his boats when he appeared on Juke Box Jury? A question which arises because of his recent lack of hits in ...

IF THERE ARE any contenders for the title of: "Quickest Success of the Year" (the past one) — I'm certain Sandie Shaw would be well ...