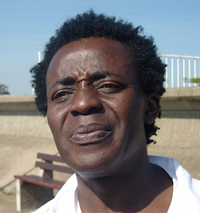 Kodwo Eshun is a British-Ghanaian writer and filmmaker. He has written on music, science fiction and other subjects for The Face, The Wire, i-D, Melody Maker, Spin, Arena and The Guardian

CALL IT drum & bass, breakbeat science or hardstep. As jungle accelerates faster into the future, it is splintering into a million different theme tunes ...

Jungle is a fierce and frenzied soundtrack to inner city Britain in '94. Based around raw, ragga-influenced white labels, raves and pirate radio stations, it's ...

Carleen Anderson was a member of James Brown's band. Then she sang with the Young Disciples. This month she releases her passionate solo debut — ...

LIKE YOU, NO doubt, I'm a sucker for what Marshall McLuhan called "participation mystique". ...

Brand New Heavies: May The Funk Be With You

The Brand New Heavies have moved into the forefront of a new musical uprising: clubs, bands and vintage denim. The revolution is here – and ...

Carl Craig: Listen To The Future

One of Detroit's legendary first generation, Carl Craig has left behind the legacy he's outgrown. Ripping up techno's rule-book, this 25-year-old is making records for ...

THE DEBUT album from Slum Village (aka Detroit trio Jay Dee, Baatin and TB) has had a three-year delivery, protracted by label mergers and unexplained ...

Tetsuya Komuro is a Japanese dance producer who's just made the world's first ever million selling jungle hit. Like the rest of his records, we'll ...

IF YOU LISTEN forward from mid-90s Adam F to late 90s Shy FX to early noughties Hospital Recordings, it immediately becomes apparent that 'jazziness' in ...

Luscious Jackson embody New York's old school cool. They're more than just a female version of The Beastie Boys — and they're going to be even bigger. ...

JUST GOES to show how wrong I can be. Figured me plus a few brainiac dumdums were the only ones nebbish enough to catch the ...

Five years on, the Black Panthers of rap are still in your face. They've lost none of their controversial power, as their recent argument with US presidential ...

PUBLIC ENEMY USED TO BE THE BIGGEST, FIERCEST RAP ACT IN THE WORLD. THEN GANGSTA SILENCED THEIR RIGHTEOUS RANTS. NOW THEY'RE BACK WITH A STARTLING NEW ...

Spiritualized: Stars In His Eyes

Spiritualized are aiming higher than the sun. Ladies and gentlemen, they'll soon be floating in space as one of Britain's biggest bands ...