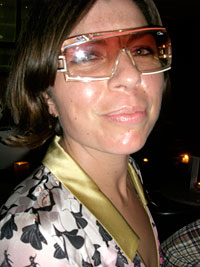 Lulu Le Vay started out as deputy editor of mouthy fanzine Sleazenation in the mid-90s which propelled to her to become a freelance feature writer for publications such as The Face, i-D, Jockey Slut and Xray through to the Guardian Guide, The Independent on Sunday, The Evening Standard and the Observer. Lulu has also spent the last ten years promoting some of the UK's most inspiring artists - Lady Sovereign, Jazzie B, Man Like Me - and over the last two years she has been managing bands, co-running independent imprint defDrive and teaching music industry skills to young people across London.

Beenie Man: Beenie There, Done That

One of the biggest stars of Jamaican dancehall, Beenie Man's outgrowing the reggae charts and going global. Lulu Le Vay meets him as he gets ...

She was a mainstay of New York nightlife — until Mayor Giuliani sent in the cops. Now Cosmo's making it in London ...

Profile and Interview by Lulu Le Vay, The Face, August 2000

The genre-defying DJs of diversity have faced shootings and bomb scares. Hard to believe they're only named after a manhole cover. ...

One Foot In The Rave

IT'S MIDNIGHT on a Friday night. You're there on the dance floor trying to persuade your body to get into the groove. All you can ...