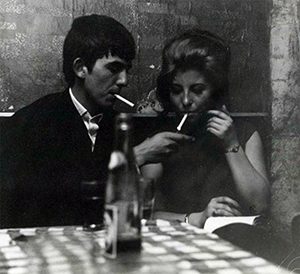 (Photo: With George Harrison at the Blue Angel, Liverpool, 1963, by Fiona Adams)

IN THE beginning... I was just sitting in Les Enfants Terrible coffee bar in Dean Street, feeling guilty. But, after a quick visit to Alfred Marks in Soho Square, was shocked to find myself working next day as the Editor's Secretary for Boyfriend in Regent's Street — Penny Valentine was there, and told me that it was "next one through the door gets the job!"

Fate, a wonderful life filled with great music and the characters that went with it had just begun, with lifelong friends, and those faces who still just turn up out of the woodwork after many years. In the last 10 years I happily refound old friends Fiona Adams and Nancy Lewis, a friend and flatmate, only to lose them both again sadly, over the past 18 months. But how wonderfully nostalgic talking over the old days and our antics!

(My only musical past at that point was the usual, Radio Luxembourg, Cliff at Finsbury Park Empire, Vince Taylor, Gene Vincent and Eddie Cochrane in the ballrooms, and coffee bars with Soho faces like Mike Sarne who would sweep you off to places like the Marquee or Establishment in Greek Street to watch the jazzy Dudley Moore Trio.)

After some scary months at Boyfriend filling in as the writer after Penny suddenly left, they never bothered with a replacement, but just dropped me in at the deep end. But luckily Penny came back and we quickly became a very busy team and great friends/eventual flatmates, churning out copy with incredible deadlines for the insatiable appetite of the publisher who took advantage of this pop music boom and the fans — and us!

My "1963" seemed to revolve around the Beatles, seeing them virtually every few weeks, while their publicist Tony Barrow had a field day, bartering one Beatles session in return for 2 or 3 other "Epstein turns" as he called them. If that wasn't enough, most nights were spent at The Scotch of St James's, socialising with pop stars and fellow journos. A hard day's night as they say.

Publications and others in order:

1964/70 Rave Magazine, a glossy monthly. Mick Jagger helped get me the job. Staff writer leading to features editor — names Maureen O'Grady and Dodo. 70% credited. First office was in Kingsway, directly across the road from Ready Steady Go! studios, so that was Fridays taken care of. This covered the Swinging 60s, Flower Power, etc music and fashion.

1974-1980 Decca, Press Officer — Head of Press. Was hired by the cool Chris Poole (of later Prince fame). Just crossed Regent Street from Hanover street to Great Marlborough Street where I had spent many a happy hour as a guest as receptions. Yet another turn of the table. Strange encounter, call from the always money-minded Andrew Loog Oldham from somewhere in South America asking for the sales figure of our Rolled Gold album, and his even bigger surprise at finding me on the end of the phone! (He was a very very regular visitor to Boyfriend in the early days, pushing the Beatles and then his own Stones amongst others.)

Final proper job as they say, Chelsea Physic Garden, helping people arrange their parties and launches, favourite and glitziest being Tom Stoppard's regular starry birthday bashes filling the beautiful gardens with champagne and guests from the film, pop and stage world. A wonderful place to work, and still to visit.

But, in this business, is it ever quite the end? Just when I thought it was all behind me, I've since aided Philip Norman with his John L and Mick books, Mark Lewisohn with his incredible Beatles epics with my tales. I mean, Rock's Backpages dropped me an email recently and here I am. How great is that!

If only I had continued with another frothy coffee in Les Enfants, who knows what would have happened?

Meeting Cassius Clay (an O'Grady via his mother) while sparring at White City — an early experience, and totally scary and left me speechless!

Spending the evening at Blue Angel in Liverpool as guests of John and George, and night guided tour by them of landmarks with Fiona for Big Beat special.

Ben E. King nights at The Scotch, and the 4 Tops and Everly Brothers concerts at the RAH.

Win a Date with the Beatles Competition for Boyfriend, an outrage according to Brian Epstein, for me to offer his boys as prizes. I think accidentally, I was the only one to ever achieve this!

Tea and croquet with the Stones on the lawn at Gleneagles while on tour in Scotland for Rave.

Keith Moon encounter at a post Stones concert at RAH, as wonderfully and graphically featured by Penny V in her Heroes and Villains feature for Streetlife, enough to say I lived to tell the tale but ended up with cracked ribs in the gutter.

This is closely followed by a visit to his house accompanied by the Beast, Richard Green of the NME. We were met by the chauffeur driven limo, but accompanying us was Keith in an open sided milk float, done up as an Edwardian gentleman — he did love dressing up, like an overgrown mad schoolboy, always full of fun. What a day out from the office!

Unexpectedly bumping into Cat Stevens at a party during the Rio Festival, both unsure it really was us! I thought he was a poseur, a Brazilian playboy, dressed all in white, very tanned, smirking as he approached me from across the room, and both almost saying at the same time when face to face — what the hell are you doing here?

Helping to proudly achieve a first I believe, by arguing a Jimi Hendrix front cover for Rave, IPC at the time apparently had an unwritten policy that black faces did not sell magazines, a major consideration for them at the time. I think at the point he had only been on the back page so Chas Chandler was very happy! This was late 60's. Can you imagine now? Times have changed.

While doing the great Martha Reeves' PR on a UK visit in the 80's, she wanted me to help her write an expose book on Tamla Motown, Fascinating in the extreme, but declined on the grounds that it would not be a "healthy" or sensible decision for either one of us.

The Action: Going where the Action is!

RAVE girl Maureen O'Grady goes where the Action is to bring you bang up-to-date on the most switched-on group in London Town! ...

The Animals: Eric Burdon: You've Gotta Get Out To His Place

WHEN THAT lovable Animal Eric Burdon invited RAVE reporter Maureen O'Grady round to his place the result was an out-of-this-world exclusive to RAVE! Eric Burdon's ...

Badfinger, Mary Hopkin, Jackie Lomax, James Taylor: As long as Apple people are appreciated by some of the people some of the time, they're happy!

Maureen O'Grady writes on the other artistes signed to the Beatles. ...

Long John, over six and a half feet tall, fair, lean and good-looking, is a well-known face around the pop world, but it was a ...

What do flowers mean to you? To the Flower People (the Gentle People, the Beautiful People) they signify love, freedom, goodness, fun and new experiences. ...

For eighteen years Freddie Lennon vanished. From the time he was six until he was twenty-four John heard nothing from him. When he returned he ...

WHEN I WENT round to meet Paula Yates at her Chelsea house, she was in a bit of a tizz. The phone rang every five ...

The Byrds Have Flown

The Byrds flew away (by T.W.A.) on August 19th after a very controversial tour over here. Just before they left they had this last talk ...

Joe Cocker: the Wild Man of the North

RAVE's Maureen O'Grady tells why gas-fitter Joe Cocker will never go back to installing cookers and sleeping in the park... ...

Here's a pop star who's really different... In two years' time he will be worth fifteen million dollars, even if he doesn't sell one single ...

The Hollies, The Walker Brothers: The Hollies: Fun and Games with the Nash and Leeds

When two pop characters like Gary Leeds of the Walker Brothers and Graham Nash of the Hollies happen to be under the same roof, there ...

The last of the big spenders — that's the image most fans have of pop groups. But how much "bread" (money) do groups really earn, ...

We all know now what Scott McKenzie looks like and sounds like. Here in this exclusive interview with Maureen O'Grady he tells you what he ...

WHO made Keith Moon spill the beans about his secret marriage? Read on for this and more dark secrets of the group, revealed by RAVE's ...

The Pink Floyd were just another group — until they discovered that light plus sound equalled entertainment. Here they entertain RAVE's pop writer Maureen O'Grady! ...

After some massive British hits the Union Gap are on their way to Britain at last. Gary Puckett rings RAVE's Maureen O'Grady from New York. ...

The Rolling Stones: After two months as a full time Stone, Mick Taylor says "I understand the whole thing now"

The Rolling Stones: Nice Things About The Stones

WE WANTED to bring you the latest information on the Stones and we wanted to call our feature "Nice Things About The Stones". RAVE girl ...

The Rolling Stones, Bill Wyman: 20 Years On Bill Wyman Prepares To Tell It Like It Was...

The Shadows: Keeping it dark about the Shadows

The Shads have been a top international group for years, yet one of their secret fears is that they're not quite with-it. This got us ...

The Small Faces: Pop girl Maureen O'Grady gets an amazing interview for you... at a Small Face's place

Small Face Mac McLagan hates being interviewed — says he always gets tongue-tied. It was quite by chance that RAVE girl Maureen was invited to ...

Far away from the plush hideaways of most stars, Mr and Mrs Steve Marriott have set up home. Here Rave's Maureen O'Grady visits their cottage, ...

Cat Stevens is very much a family man. Success hasn't sent him searching for anything more than pleasing his parents and making his mum happy. ...

It's our RAVE way of congratulating the Tremeloes on their fantastic return to success. For the inside story Maureen O'Grady reports... ...

THE TALL white house in Notting Hill Gate had three doorbells. All, however, were nameless, not giving away any clues who lived there. ...

The Walker Brothers: Making it Easy for Themselves

The Walker Brothers have shot to the top. Six months ago they were unknown. Now they share with the Beatles and the Stones the tag ...

Scott Walker: Scott the loner — even more alone than ever

Since Scott Engel left the Walker Brothers he's had time to think about being alone. Does he have any regrets, or is he looking with ...

Scott Walker: The Singer Not The Song?

The Who: How Well Do You Know Who?