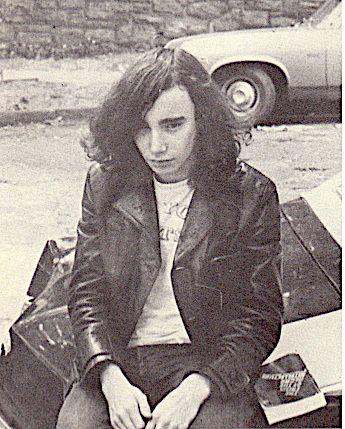 Michael Simmons is a musician, journalist, filmmaker, and activist. He was dubbed "The Father Of Country Punk" by Creem magazine in the 1970s, edited the National Lampoon in the '80s, and won the LA Press Club Award in the '90s. He's written for the LA Weekly, LA Times, Rolling Stone, Penthouse, High Times, Arthur, Mojo, and The Progressive.

Retrospective and Interview by Michael Simmons, LA Weekly, 12 May 2011

I'M 56 YEARS old. Old enough to remember one president's assassination and another's resignation, black people getting beaten for insisting on the right to vote ...

Nick Cave, Larry "Ratso" Sloman: Ratso Has A Record (and a duet with Nick Cave)

WHAT MOST PEOPLE dream about, Larry "Ratso" Sloman makes happen. Anyone who's read Ratso's first book, 1978's On The Road With Bob Dylan, has witnessed ...

HE HAS AN upcoming tribute concert and box-set release and yet the question many will ask is, "Who is Chris Darrow?" ...

FROM HIS 1968 DEBUT ONWARDS, THE MUSIC OF DR. JOHN HAS BEEN MARINADED IN THE PSYCHEDELIC VOODOO OF NEW ORLEANS. NOW, WITH A TRIBUTE TO ...

HOW DYLAN'S FIRST ALBUM OF ORIGINAL MATERIAL SINCE 1990 BECAME A WAR OF WILLS, AND AN ARTISTIC TRIUMPH. AS TOLD TO MICHAEL SIMMONS. ...

SANTA DROPPED Bob Dylan's Christmas Album Down Mojo's chimney last night, and as we celebrated with premature mince pies and stollen it provided plenty of ...

"LATELY I FEEL like the loneliest man in America," writes Steve Earle in the liner notes of his most recent album, Jerusalem (Artemis). ...

"LATELY I FEEL like the loneliest man in America," writes Steve Earle in the liner notes of his most recent album, Jerusalem (Artemis). ...

Kinky Friedman: I Was a Texas Jewboy

MY FIRST LIVE sighting of Richard "Kinky" "Big Dick" Friedman was at Max's Kansas City in New York in 1973. He was headlining Upstairs at ...

Grateful Dead: Dead Without Garcia: Is It Worth the Effort, or a Waste of Time?

ONE MORE NEGATIVE remark about hippies or the Grateful Dead and you punk-rock bullies will have petunias shoved down your throats. ...

Heroes are important. They make you want to stay alive when you aren't sure whether you've been left behind, or are about to be run ...

DURING THE early stages of a hallucinogenic drug trip, the voyager experiences giddiness and a vision of existence as a zany, absurdist cartoon. Eccentricity in ...

If the Medium is the Mess, thank the maker of Negativland. ...

Previously unreleased live set of the New Orleans R&B pianist at his best. ...

ON THE TINY YouTube screen is a close-up of a diminutive black woman who looks about 12 but is, in the video, 16. Her hair's ...

A Half-Century of McCabe's Guitar Shop