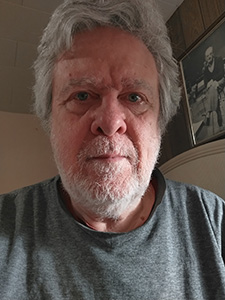 Mike Quigley contributed regular articles to Vancouver's notorious underground newspaper THE GEORGIA STRAIGHT and its successor THE GRAPE from December 1970 to August 1972. He also wrote numerous freelance articles and reviews of classical and pop music, theatre and films for THE VANCOUVER PROVINCE, one of the city's two daily newspapers from 1969 to 1976.

MIKE QUIGLEY: What's the reaction been like wherever you've played? ...

This interview took place during the Vancouver Pop Festival in 1969, a horribly-organized mess which actually took place near Squamish, about an hour north of ...

Chicago: Another interview with Jimmy Pankow

After Chicago played their first set at the Gardens a couple of Thursdays ago, we wandered backstage to try and line up an interview with ...

This interview was conducted before Pink Floyd's first Vancouver concert in October of 1970. Despite a whopping hangover, I managed to struggle out to the ...

Elton John: This Is Your Song: The Elton John Interview

WE ENTER THE Holiday Inn on Howe Street through its Southern-fried colonnade and up its Harlequin Romance staircase into the Columbia Room with its Christmas ...

Elton chats backstage about doing interviews; the Friends soundtrack and the 17-11-70 live album; on being hyped and the hype machine; doing TV with Andy Williams; on why he likes Canada; on Liberace; on his own style, and his hero worship of Leon Russell.

This interview with Al Jardine, Carl Wilson, Mike Love and Bruce Johnson was recorded in January 1969. ...