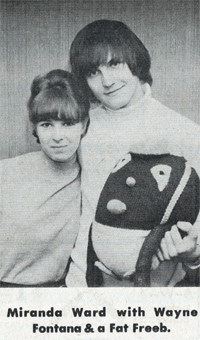 Miranda Ward interviewed the Beatles, the Stones and many other leading pop groups of the '60s for various publications of the era. Miranda died in December 2019.

The Guardian's "Other Lives" obit

The Animals, The Beach Boys, The Kinks, Martha Reeves & The Vandellas: Hit Parader's Letter From London

A FEW WEEKS ago when I met the KINKS for a drink, PETE QUAIFE ruined my stockings! The pub was crowded and in the crush ...

The Rascals: They May Not Have Had A Hit, But Paul McCartney Saw Them Twice! (They're the Young Rascals)

PAUL MCCARTNEY went to see them twice. As did BILL WYMAN, BRIAN JONES, KEITH MOON and many others. Them? THE YOUNG RASCALS. ...

WHEN OTIS REDDING was over here, Ready, Steady, Go! built up an entire programme around him, using his own band (only 9 of them came over, ...

The Rolling Stones Discover A New Generation Of Fans

IN FLANAGAN'S bar off Kensington High Street, Keith Richard, Brian Jones and I were being watched — by two bartenders in Edwardian dress and grey ...

The Beatles: George Harrison: The Scene and Heard Interview

NOTE: In a brief conversation that appeared on the BBC Radio program Scene and Heard, George Harrison spoke with reporter Miranda Ward from the set ...