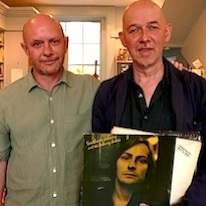 The world-famous author of four bestsellers - Fever Pitch, High Fidelity, About a Boy and How to be Good - Nick Hornby (on left, with Nick Coleman) has written about music for THE INDEPENDENT, MOJO and THE NEW YORKER. The film of About a Boy, with a soundtrack by Badly Drawn Boy, was released in 2002. His 31 Songs was published by Viking.

ABBA: Welcome to the Palindrome

WHAT A PIECE OF WORK is a boxed set! How infinite(ish) in faculty! In action, how like an angel! ...

Pop Quiz: What does the new Top Ten list mean?

IN 1973, FOR AN ESSAY published in The New York Review of Books, Gore Vidal read his way through the Times best-seller list in an ...

IT'S JUST BEFORE Christmas last year, and the Philadelphia rock 'n' roll band Marah is halfway through a typically ferocious, chaotic and inspirational set when ...

The Thrill Of It All: The Advent of MP3 Blogs

MY FIRST NOVEL, High Fidelity, was published in 1995, and shortly afterwards, I embarked upon my first American book tour. I took with me a ...

Unsparing in its portrayal of addiction, divorce and racism, Billie Holiday's memoir is now a Penguin Modern Classic. ...