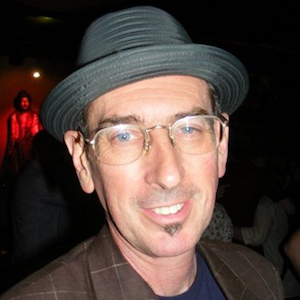 Writer, publisher of Straight No Chaser magazine, and cultural evangelist, Paul Bradshaw has been active on the London music scene since the early '70s. Originally from the industrial hinterlands of Manchester, he left school for Rochdale College of Art and in 1970 progressed to study painting at Gloucestershire of Art.

Upon arriving in London in 1974 he settled in Dalston and in between teaching practice and college he spent his time in scouring the reggae emporiums on the Kingsland High Road. Opting out of a career in the teaching profession he commenced working part time as a youth worker and began writing about reggae for the Morning Star and West Indian Digest.

Bradshaw also contributed to The Wire magazine, worked part-time in Maroons Tunes in Soho and co-managed a daytime project for young unemployed people in north Hackney. In the summer of 1988, along with Neil Spencer and Kathryn Willgress, he launched "designer fanzine" Straight No Chaser – "a magazine of World Jazz Jive".  Though rooted in UK jazz dance scene, it's embraced the music of the African diaspora. It championed a new generation of UK musicians and producers  (Jazz Warriors, Omar, Galliano, 4 Hero, Reprazent etc) alongside up and coming artists  from around the world. Straight No Chaser paid maximum respect  to the musical elders and innovators who have provided the foundation for today's culture.

Though he's never regarded himself as a DJ he regularly played at Far East at the Blue Note in Hoxton Square and on all the Straight No Chaser tours in Japan. He was key to the programming of the London Arts Board backed Straight No Chaser collaborative events – 'Shape Of Things To Come' – which featured amongst others the Roots, MC Solar, DJ Krush, Bjork, Talvin Singh, Steve Williamson, Airto Moreira and Flora Purim.

In 2009 the impact of the internet on Straight No Chaser led to Bradshaw to make the difficult decision to cease publication. In 2010 he published Mark "Snowboy" Cotgrove's seminal  From  Jazz Funk & Fusion to Acid Jazz: A History Of The UK Jazz Dance Scene. It was launched at 'Beyond The Ballroom' – a collaboration with The Barbican.

In 2011, Bradshaw launched his own blog – https://ancienttofuture.wordpress.com/.  He  writes for www.mondomix.com and acted as consultant for Jamie Cullum's BBC 6Music show.  Along with Jason Jules, he co-produced  numerous events including  a "Fringe" to the London Jazz Festival,  'The Art Of Lemi Ghariokwu'  and a major exhibition of Chaser photography by Peter Williams.

Current projects include 'Sacred Music – Sacred Spaces' – a PRS funded re-interpretation of John Coltrane's A Love Supreme – and an exhibition of paintings and illustrations by Japanese artist Yosuke Kawamura.

WITH TRINITY, Clint Eastwood, Prince Hammer, Jah Lion and Prince Far I here in London town it's like a DJ Jambo-r-r-r-r-r-ee and the chance to ...

Mikey Dread: Who's The Dread At The Hub Of Dub? Michael Campbell

SUNDAY NIGHT at the Lyceum and Laurel Aitken, the 'high priest of reggae' (remember that one, boot boys?) the king of Jamaican blues, whose musical ...

WHERE REGGAE really begins — in tune to the sound system. Here is the heart of the music: groups of youth, each with their different philosophies, ...

BRINGING CULTURE TO THE MASSES ...

Jamaica '82: the DJs rule the nation's charts and hearts but alternative voices are making themselves heard in the roots poetry of artists like MUTABARUKA and MICHAEL SMITH. PAUL ...

WITH THREE singles constantly bubbling in the reggae charts, and The Prophet Rides Again riding high in the soul charts as well as being the ...

Grand Mixer D.ST: A Cut-Up Above The Rest

PAUL BRADSHAW ASKS GRAND MIXER D.ST HOW TO BE MIXED-UP AND SUCCESSFUL ...

THE HILARIOUS hallucinatory view of consumer America that sprang from the songs of dashing young 'fashion play' Slim Gaillard earned him national notoriety during the ...