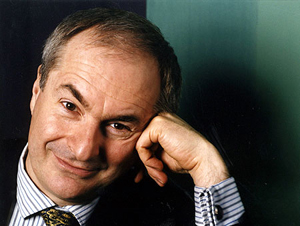 PAUL GAMBACCINI was born in New York City on the 2nd of April, 1949. He earned degrees in History (Dartmouth College USA) and Philosophy, Politics and Economics (University College Oxford). He was News International Visiting Professor of Broadcast Media at Oxford University in 2009.

Gambaccini’s career began as a writer for Rolling Stone commencing in 1970 and continuing through the decade. Paul celebrated his fortieth anniversary as a national broadcaster on the 5th of October, 2013. He made his Radio 1 debut in 1973 and his first Radio 4 appearance the following year. He currently presents America's Greatest Hits on BBC Radio 2. His rotating Radio 4 mini-series are Counterpoint and And The Academy Award Goes To... . He hosted The BBC Jazz Awards, uniquely broadcast on both Radios 2 and 3, in 2005 through 2008, and has been a frequent host of Friday Night Is Music Night on Radio 2. Radio 4 celebrated the 40th anniversary with the mini-series The Gambaccini Years.

Gambaccini appeared on BBC Radio 1 for 18 years, presenting the US chart show for most of that time. At some point he has been a regular on each of the first four BBC radio networks and first four British terrestrial television networks. Paul had runs presenting Kaleidoscope on Radio 4 during the 1970s and the 1990s and for many years hosted the occasional mini-series For One Night Only. He was one of the founding broadcasters of Classic FM. Gambaccini had a thirteen-year film review stint on first TV-am and then GMTV. He has made thousands of television appearances, including Live Aid and The Nelson Mandela Birthday Concert, at the time the two most-watched TV shows in history.

Paul was co-author of The Guinness Book Of British Hit Singles and related titles between 1977 and 1996. Combined sales of these volumes exceeded one and a half million copies. Paul's own books include Radio Boy, Love Letters, and Close Encounters. Gambaccini co-authored Television's Greatest Hits with Rod Taylor, with whom he co-wrote and associate-produced two BBC 1 television series of the same name. Rod directed Paul's three series of The Other Side Of The Tracks on Channel 4.

Gambaccini has presented the Ivor Novello Awards for 27 years. He hosted the Music Industry Trusts Dinner for 14 years. He presented the Sony Radio Academy Awards from 1999 to 2008 and the Parliamentary Jazz Awards from 2005 to 2012. In 1995 Paul was named Philanthropist of the Year by the National Charity Fundraisers for his work on behalf of the Terrence Higgins Trust. He received the Outstanding Contribution to Music Radio award from the Radio Academy in 1996.

Paul Gambaccini has been nominated for Sony Radio Academy Awards on several occasions. He was named Music Broadcaster of the Year in 2003, won Music Special of the Year in 2004 and received the career prize, The Gold Award, in 2007.

In 2005 Paul became a British citizen, while retaining his original American citizenship, and was inducted into the Radio Academy Hall of Fame. Gambaccini was one of the inaugural inductees in the UK Softball Hall of Fame in 2007. He is a Prince's Trust Ambassador.

THE 10CC THAT will be touring America starting in mid-July is only half the group that recorded 1975's 'I'm Not in Love', but twice the ...

MANCHESTER, England — "I am known in the business for hype," UK Records president Jonathan King boasted rather than confessed. "Sometimes I hype like hell. ...

Adam & The Ants: The Ants Are Coming

So unplug the jukebox And do us all a favor That music's lost its taste So try another flavor — Adam and ...

Joan Armatrading: Whatever's For Us (Cube)

FROM HER opening piano passage on 'My Family', the most endearing keyboard introduction since the first notes of 'Your Song' led off Elton John, one ...

Back Door Trio Forsakes the Pubs

LONDON — "THIRTY thousand people? That's as many as they get in a Blackburn football match!" ...

LONDON — "Whoever is doing their public relations has no sense of shame," BBC disc jockey John Peel complained. He had just read newspaper reports ...

THIS JANUARY marks the tenth anniversary of the Beatles' appearance on the American charts. Last month Rolling Stone conducted its first full-scale interview with Paul ...

THIS SONGWRITER/producer's debut as an LP artist frequently bears similarities to the work of Barry White. Vocals are alternately guttural and emotive, then strident and ...

MALCOLM JOHN Rebennack is a New Orleans musician who has played on more sessions than he or anyone else can remember. In 1968 his first ...

"WE LIKE TO be a nice little country-rock band from Los Angeles... about half the time," Eagles drummer Don Henley claimed backstage after the band's ...

THE SMILING face of Diana Ross froze as she answered the question. The gauche bastard had just asked how she felt replacing Tammi Terrell in ...

LONDON — ANYONE WHO calls Elton John a "bald cunt" is risking the wrath of the rock & roll mainstream, but Billy Idol of Generation ...

A FRIENDSHIP formed backstage at the Apollo Theater 19 years ago is responsible for one of the year's surprise hits. ...

"THE NEXT stop that we make will be England" was the cue for 3000 Londoners to get out of their seats and move to the ...

LONDON — "An English audience is like a good fuck," Glenn Frey of the Eagles explained earnestly in a trailer-cum-dressing room behind Wembley Stadium. "You ...

Kracker, The Rolling Stones: Stones in Europe: A Hearty Welcome After 2 Long Years

'LIVE AND Let Die' is the best record Paul McCartney has made since Let It Be, although 'Maybe I'm Amazed' is an equally good composition. ...

DON McLEAN could well be the pop Orson Welles of the Seventies, a talented man who happened to make his initial impact with one of ...

Maxine Nightingale's Disco Hit: 'I Couldn't Dance to It'

MAXINE NIGHTINGALE is puzzled by the success of 'Right Back Where We Started From', a song which has made her a star, pushed her marriage ...

AN UNKNOWN English teenager playing over 20 instruments has produced the most important one-shot project of 1973. It is a debut performance of a kind ...

(PLEASE ALLOW the writers of Jesus Christ, Superstar and Joseph and The Amazing Technicolor Dreamcoat to introduce themselves). ...

"EVERY DAY for the past 16 years somebody has asked me how I call my lover boy," Sylvia Robinson marveled, referring to the public's memory ...

The Rolling Stones: Stones in Germany — World Next?

FRANKFURT, GERMANY — The Rolling Stones are on tour again, traveling through Europe and preparing themselves for Bicentennial celebrations in the U.S. this summer. ...

The Rolling Stones: 'Its Only Rock and Roll'

"WE HAD THE hook line with nothing to set it to for a long time," Keith Richard explained in the Rolling Stones' London office. "Then ...

Stealers Wheel: Down to Two And Enjoying It

LONDON — Ferguslie Park is a housing development in Scotland where Gerry Rafferty and Joe Egan once lived. The long-time friends are now the sole ...

Report and Interview by Paul Gambaccini, Rolling Stone, 9 May 1974

LONDON — Two children, one black and one white, played on the doorstep of Cat Stevens's terraced house. ...

Wings: Dawn of the Age of Venus and Mars: McCartneys, Wings Take to the Stars

LONDON — IT WAS a brilliantly sunny day in the late spring Britons like to call summer. Secretaries were tanning themselves in St. James Park, ...

"LOOK, THERE goes someone with black hair! Is that a Wing?" asked one of the four 12-year-olds camped at the New Theatre six hours before ...

Wings: Paul McCartney's verdict on the Europe debate: "One of the worst things is that miles are going to become kilometres..."

Quite what all that has to do with 'Venus And Mars' is not at first apparent. But stay with us, all will be revealed. ...

Steve Winwood Grows His Own

LONDON — AFTER an extended period of getting together whatever one gets together in the English countryside, Stevie Winwood, 29, has emerged with his first ...