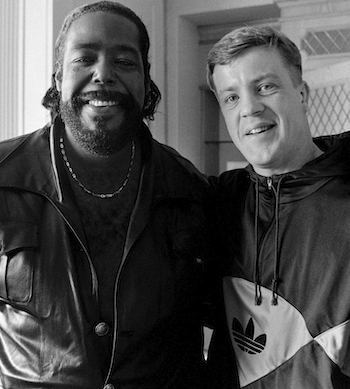 Paul Wellings (pictured here with the great Barry White), a.k.a. Paul T/DJ Madhatter (NME) was one of the original rebel pioneers of underground black music on the iconic LWR pirate radio station in the late 80s. He is also an acclaimed author, broadcaster, journalist and spoken word artist. He helped create the militant 'Speng Groove' soul and reggae music genre and scene. He attended the famous free Anna Scher Drama School in Islington, North London (where Kathy Burke, Spandau Ballet's Gary and Martin Kemp, Phil Daniels and Oscar-winner Daniel Kaluuya went). He was named after the civil rights singer Paul Robeson (his mum's favourite). He was born in the London overspill and raised in the East End and is the grandson of a famously philanthropic Miner and son of Public Sector workers.

In 1985 Wellings was lucky to land a prestigious freelance job on the music press with the New Musical Express (NME), thanks to iconic Editor Neil Spencer and also on Black Echoes. He was one of the first to write about the Rare Groove/Rap scene and its links with the soccer casual movement. He hates name droppers (as he told The Pope recently!) but has interviewed hundreds of diverse musicians including James Brown, Barry White, Public Enemy, Lady Leshurr, Frankie Goes To Hollywood, the Rolling Stones, the Sex Pistols, the Specials, LL Cool J, Queen Latifah, Yellowman, Paul Weller, Jazzie B, Natalie Cole, Barry White, Ian Dury, Norman Jay, the Wailers, Gregory Isaacs, John Martyn, Ronnie Scott, and random oddities like Hollywood actor Christian Slater, activist Tony Benn and the notorious Reggie Kray.

He also worked on MOJO, the Daily Mirror and London's Evening Standard, writing about music, sport and the arts. Paul has appeared on numerous TV shows discussing football, black music, youth culture, soccer casuals, and pirate radio. He was interviewed for the major ITV music series S.O.U.L. about underground music. In the early 1980s as a teenager his punk-reggae group the Anti Social Workers released the LP Positive Style, produced by the legendary reggae producer the Mad Professor (of Massive Attack fame) spitting lyrics over his dub tunes, to rave reviews. The group was championed by the mighty Radio DJ John Peel and supported reggae royalty Peter Tosh (Bob Marley's partner) and Eek A Mouse on tour and did well in the Japanese reggae charts. He is about to release a follow-up album under the name Anti Social Worker on m1music.com which contains new material and one unreleased lyric from the first album given a re-mix. He has performed poetry with the likes of John Cooper Clarke, Linton Kwesi Johnson and Benjamin Zephaniah. He has had five books published: This Is The Modern Word (his poetry collection); I'm A Journalist...Get Me Out Of Here (about life on the NME and Mirror); Spend It Like Beckham (about the greed in football); Sex, Lines And Videotape (about cult movies); The Divine Comedians (about Radical Stand Up Comedy) and the screenplay Thieves (for BBC Play For Today). But his expertise was as a rare grooves DJ with underground radio station LWR (the station that launched Radio 1's Pete Tong, Carl Cox, Mr C, Westwood, Derek B and Maxi Jazz from Faithless). He inherited the name 'DJ Madhatter Paul' after driving to soul weekenders with Trevor 'Madhatter' Nelson who went to Radio One and dropped the 'Madhatter' tag. He played a prominent part in pioneering the 'Speng Groove' music scene which played militant inner city soul message music interspersed with lovers rock reggae. This scene had a mainly black audience at private house parties because of racist club polices and at iconic club Trends in Hackney. He has DJ'd at Festivals, One Dayers, Weekenders, Ministry Of Sound in London and Pacha in Ibiza. In 2021 he launched the pressure group 'DJs Against Bigotry' to try and stop DJs with hate crime views playing major venues. He was one of the first DJs to play Public Enemy and Soul II Soul on air anywhere in the world and was a B-Boy DJ as a teenager. Now he just DJs, performs spoken word and writes when he can. He is married to the niece of the late great reggae superstar Sugar Minott. He is fuelled by socialism, the love of a good woman and West Ham United... You can see more of his work on You Tube or Google by searching 'Paul Wellings NME'. As Anti Social Worker, Paul in March 2022 released the album Militant Business & Grime Poetry, which has been played on BBC Radio 1 and 1Xtra and was listed by a top critic as one of the albums of the year.

IT IS A HOT day in London’s East End. I’m sitting in my home of Stepney, sipping an ice-cool lager outside the infamous Blind ...

The Badder the Better: Soulboy Life in London

IN LONDON TOWN, they’re funking till they’re raw. From badland clubland they’ve voted with their feet for black soul music. Pirate stations like ...

Anti Social Workers and Me

UNLIKE MOST music journalists, I didn't want to be in a band. I'd signed a record deal a year before through the legendary dub producer ...

John Lydon: Lydon and I

The Rise and Rise of the Casual: Football and Music

Book Excerpt by Paul Wellings, 'Spend it Like Beckham', 2005

THE BEST FANZINES in the mid 80’s were The End (from Liverpool, written by Pete Hooton, lead singer of The Farm, whose single ‘Altogether Now’ ...

Make my day: the best (and worst) lines in the history of film

1. The Four Aces, Dalston, London I was never one to go to those mainly white clubs that the suburban househeads went to. I was partly ...

10. The Good, The Bad And The Queen, Rock Against Racism 30th anniversary, Victoria Park, London. 2008 I went to the original RAR gigs and ...