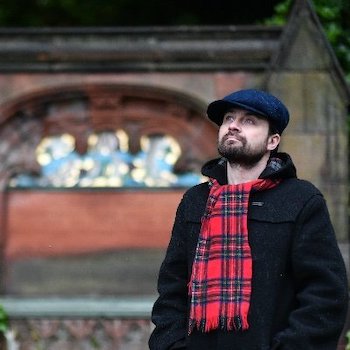 Peter Ross is a freelance journalist based in Glasgow. He has written for titles including The Guardian, Sunday Times, The Times, National Geographic Traveler, Scotland On Sunday and the Boston Review. He is the author of A Tomb With A View: The Stories & Glories of Graveyards, Daunderlust and The Passion Of Harry Bingo.

NOT far from David Byrne's London hotel, a fashion store is selling T-shirts bearing the logos of the Ramones and of CBGBs, the legendary New ...

Esperanza: Tragedy, but the band played on

Report and Interview by Peter Ross, The Times, 13 April 2014

Esperanza were playing Glasgow's Clutha bar when a helicopter crashed through the roof. They tell Peter Ross how music helped them and their fans. ...

The folk veteran's rendition of her 1997 album A Few Small Repairs was full of polish, with great cover versions, but lacked a vital spark. ...

Long stretches strained for effect, but at their best Guy Garvey's band make the creation of beauty appear effortless. ...

IN BLUE BOILER suit and red Converse, like some hipster Winston Smith, Matty Healy appeared more 1984 than 1975 as he took the Hydro stage. ...

Why did this show feel undercooked? There were issues with pacing, but the main problem was the choice of an outdoor venue. ...

WHAT DOES a feminist look like? The question flashed up in huge letters behind the stage before a performance of 'Joan of Arc', one of ...

SHARLEEN SPITERI had a question. "Does everyone remember 1989?" The cheer suggested that, yes, the Glasgow crowd did. Which was just as well. Texas were ...