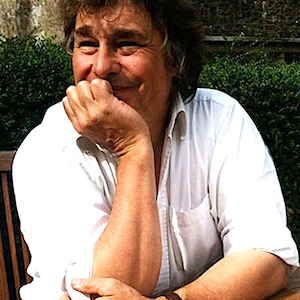 Phil McMullen was born in Wells, the second smallest city in England, in 1958. Living in a small rural community led him to write about the music he was voraciously discovering as a teenager, since he was otherwise unable to express his excitement by sharing it with non-existent contemporaries. His first opportunity as a published writer came with the launch of Nigel Cross' Bucketfull of Brains magazine in the early 1980s, a now legendary magazine which Phil continued to contribute to during the following decade. His name was soon appearing as a reviewer and feature writer in innumerable other underground fanzines and magazines across Europe and America, with regular columns in Rockerilla in Italy, Ruta 66 in Spain and The Bob in the USA.

In 1988 Phil became the founding editor of Ptolemaic Terrascope magazine, which over the course of the next eighteen years and 35 issues became one of the most respected, widely read, frequently quoted and oft-imitated independent music journals in the world. The Terrascope championed the finest and most worthwhile offerings from the worlds of psychedelic rock, folk, free jazz and beyond, making a particular point of publishing interviews with unsung heroes from the past alongside up and coming bands from the present day: David Ackles and Neutral Milk Hotel, Vivian Stanshall and Guided By Voices, Jefferson Airplane and Bardo Pond, Shirley Collins and Current 93 all appeared under the Terrascope’s lens, as well as many, many more, from the internationally famous to the unjustifiably obscure. In essence, almost the entire history of psychedelic rock and roll from the Sixties to the present day has been discussed, dissected, interpreted, and evaluated within its pages.

Since handing over the reins of Ptolemaic Terrascop magazine to a new editor in 2006, Phil has concentrated on publishing his work online, and curating a series of international festivals and multi-media events that bring together what's become known as the "terrascopic community".
Phil is married with two grown-up children and continues to live in the West of England.

SO, HE'S GONE THEN. If Nick hadn't metaphorically picked me up by the scruff of the neck and encouraged me to start writing the interviews ...

THERE ARE VERY few people who can genuinely be accredited with changing the face of a certain field of music. Most of that rare breed ...

PT: WHAT DRIVES you? Is there some kind of creative force inside you just bursting to write new songs all the time? ...

THE MUSIC of Help Yourself was never easily categorised. American-flavoured country-rock to begin with, albeit still somehow redolent of pastoral England, by their second and ...

BASS GUITARIST and keyboard player Pete Sears occupies what I believe to be a unique position amongst Terrascope interviewees to date, his career having begun ...

THE MISUNDERSTOOD were one of the most innovative and enigmatic bands of the '60s and one of the psychedelic era’s best loved groups. ...

DON PRESTON: a man whose career with Frank Zappa spanned the period 1966 to 1974 all told, with time off for good behaviour in between, ...

NEUTRAL MILK HOTEL isn't so much a band as a concept. The product of the singularly imaginative mind locked inside Jeff Mangum's head, it's been ...

ROLL THE NAME around your mind a while and try to imagine what they sound like, and whatever you come up with I guarantee you'll ...

"You are about to have probably the most unusual musical experience of your life. The music will enter areas of your mind never before opened ...