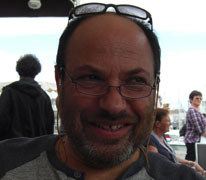 Rob Steen is a lecturer, journalist and author who recently returned to the mainland after fleeing London for Cornwall in a moment of end-of-millennium panic. His first flirtation with music writing came in a Kentish Town tower block as editor of Ikon-UK, a fanzine fuelled by a slavish devotion to Todd Rundgren and Paki Black.

Thwarted in his attempts to elicit the co-operation of Messrs Fagen and Becker for a swiftly-abandoned Steely Dan biog he was composing during lunchbreaks while covertly operating as The Standing Orders Clerk Otherwise Known As Steeny Dan, he began reviewing gigs and records: first for a Watford freesheet, then Record Mirror, No.1, The Hit, Mix, City Limits and any other long-forgotten publication prepared to publish his quirky offerings. Some – The Independent, Mojo – even survived.

His chief claims to fame, he contends, lie in being the first Briton to interview Michael Jordan, the first to review an REM album, and the first to interrogate Messrs Stipe and Buck – on the arts desk (literally) at City Limits. Focusing primarily on the competitive arts (sport to you and me), his musings for national newspapers in Britain, Africa, Australia and India have attracted shock and, just occasionally, awe. As editor of The New Ball, cricket’s Granta, he contented himself with providing the planet’s finest forum for sporting agitprop.

Runner-up for the William Hill Sports Book of the Year award, winner of the Cricket Society Literary Award, he has written acclaimed biographies of Sonny Liston, David Gower and Desmond Haynes, none of whom, he suspects, ever shared his unhealthy passion for XTC or Fleet Foxes. Cursed with a need to be disillusioned by idols, he has interviewed Rundgren, Fagen, Laura Nyro, Rickie Lee Jones, Carlos Santana, Squeeze, even Ian Botham and Henry Cooper. He named his first daughter after Nyro, and would have called his son Todd had his then-wife not drawn the line. Now living in the world’s bonfire capital, Lewes, he is currently training wannabe hacks at the University of Brighton and writing Competitive Arts, a history of spectator sport.

VAN MORRISON'S second live recording, following a decade after his state-of-the-art It's Too Late To Stop Now, was recorded last year in his home town, ...

Donald Fagen: Reeling In The Years

NOT BEFORE time, the man who did it again is doing it again. But, after nine years of soundtrack credits and precious little else, muffled ...

Rickie Lee Jones: The War Of The Berets

WITHOUT WISHING to take anything away from the Fabulous Furry Finn Brothers, it’s hard not to feel a bit sorry for Squeeze. With a little ...

Profile and Interview by Rob Steen, The Independent, 2 December 1993

MY WIFE KEPT REMINDING ME: "Whatever you do, don't mention you named our daughter after her." Too creepy. What about the dispassionate dignity of the ...

THE VERY LEAST YOU CAN SAY ABOUT CARLOS Santana is that he has always been a pleasant plucker. Surely no-one has ever coaxed as much ...

A TIP. DON'T TELL KIRSTY MACCOLL SHE IS OUR FINEST FEMALE songwriter. Not even if you are besotted with Titanic Days, her latest and greatest ...

THE ANKLE-LENGTH SKIRT AND black-and-white mane threw us at first, but not for long. The Runt always was a dead ringer for Charlie George. Besides, ...

From '60s Manchester – the Mockingbirds, Mindbenders, and writing hits for the Yardbirds and the Hollies – through to the break-up of 10cc, via Stawberry Studios, Jonathan King and hits like 'I'm Not In Love': it's all here!

WHEN LAURA PLAYED MONTEREY, nerves and rushed rehearsals saw her flounder as the hairies waited for Hendrix. Tonight there are enough baldies in the pews ...

THE VOICE IS ALL GRAVEL AND FIVE o'clock shadow, crumbling with every line. The piano caresses. The organ surges and swirls. The guitar soars like ...

Chris Isaak is back with a surprisingly angst-ridden album. Give a big hand to the ex-pug with a broken heart. ...

IF YOU'RE GOING TO BE A one-hit wonder, you might as well serve up a concoction as delicious as ‘Spanish Stroll’: Lou Reed goes finger-poppin' ...

I RANG TODD in his Maui studio in December 2001, while he was remixing Something/Anything? for 5.1 Surroundsound. ...

"DON'T BOTHER." The owner of Octave in Lewes High Street, my ever-so-friendly local record store (sincere apologies if that sounds as if I'm gloating over ...

THIRTY-FIVE YEARS ago this month, Pretzel Logic, the album that alerted the world beyond L.A. and NYC to the thrillingly unpigeonholeable sound of Steely Dan, ...

FIRST, A HEALTH WARNING: if you are prone to cringe, foam or rage at reviews that put emotion first and last, and make no attempt ...

The Doors: When the music's never over: L.A. Woman and the Doors (or How I Learned To Stop Worrying And Love Wasps)

BY NOW, they said, I would have outgrown it. When imagining myself plunged deep into the darkest inner recesses of middle age, I, too, once ...

Procol Harum: A Bit Of 'A Rum Tale': Procol Harum, Grand Hotel and the Timeless Allure of Lovestruckness

"IT'S A TRICKY one to play." Were my ears deceiving me? Here was the voice behind one of the most frequently heard-and-covered songs of all ...

David Bowie, Todd Rundgren: The Dame and The Runt: A Tale of Two Chameleons

A COUPLE OF pensioners have been popping in for sleepovers lately, fitter than fiddles and bouncing with frankly disgraceful enthusiasm. Judging by their latest recorded ...

The Doors, Ray Manzarek: What a shame about Ray

"RAY RIP", texted my long-time muso pal Graham at 7am. Since neither of us, to my almost certain knowledge, has ever befriended a Raymond, my ...

THE ARTIST Originally Known As Gordon Sumner is just about the only musician bar Justin Bieber who can be guaranteed bad notices for breathing. This, ...