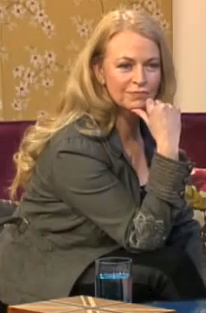 Sonia Poulton is a journalist and broadcaster. Some people call her a "Social Commentator" – which she likes.

She was raised in a musical family but only mastered the spoons. Living the notion that "those who can, do, and those who can't, teach", Sonia gravitated towards music journalism, primarily black music – including the beginning of hip hop – which she covered from 1987 to 1997.

She contributed to many titles including Echoes, Q Magazine, Muzik, the Guardian Guide, The BRITS Magazine and the London Evening Standard. She was the sole contributor to the "Street Knowledge" spot on Kiss-FM from 1990 to 1995.

She was one of the last journalists to interview hip hop artist the Notorious B.I.G. before his murder in 1997. He told her he had many enemies and didn't expect to live a long life. She gained a decent reputation among artists for her forthright, no-nonsense manner. At one point, she was the only UK journalist granted an interview with Mary J. Blige, who had a notoriously tricky relationship with the press.

Sonia was invited to the US homes of Chuck D and Ice Cube as well as an eventful US Anniversary Tour for Def Jam Records, which featured an excitable Wu Tang Clan and an incident involving mace! The 2LiveCrew once wrote a song about her although it had no basis in fact!  Producer Quincy Jones cited one of her pieces at Edinburgh Festival as an example of "decent, non-stereotypical reporting".

Since 1997 – and the birth of her daughter – her journalistic horizons expanded and she now comments on a variety of issues, mostly with a strong social conscience, and across national and international mainstream media.

She was also responsible for media-tutoring a number of artists, including the Spice Girls (and was responsible for the creation of their iconic nicknames). She still loves real hip hop and misses "the glory days of Public Enemy and NWA".

When the US hip hop elite hits the road, you expect sparks, right? When you put together names from the East and West Coast on ...

From healthy US hip hop act to global superstars in under twelve months, you could say 1996 has been a remarkable year for the FUGEES. ...

KRS-1 the grand daddy of hip hop takes to the soap box for a speech on record labels, street cred and 'The Goddess Theory'. Listen ...

The death of Tupac has left the hip hop bad boy vacancy wide open. MOBB DEEP'S Havoc and Prodigy have already more than filled his ...

At the age of 25, TUPAC SHAKUR was gunned down and died six days later in a Las Vegas hospital. His death was inevitable, but ...