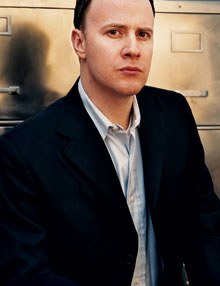 Steven Daly became a contributing editor at Vanity Fair in May 1999. Prior to that, he was a contributor to Rolling Stone, Interview, and Spin, where he served as music editor from 1991 to 1992. He also served as the U.S. cultural correspondent for BBC Radio 1 from 1994 to 1997. Daly is a co-author of Alt.culture (HarperCollins, 1995) and of The Rock Snob's Dictionary (Broadway, 2005).

Steven on the RBP podcast

The woman Michael Bolton calls "the Hit Bitch" talks about her working practice; how a song goes from demo to hit; her favourite artists; how she persuaded Cher to record 'If I Could Turn Back Time'; seeing the Beatles as a kid, and becoming a writer; not being keen on co-writing; still being thrilled to hear her songs on the radio; not wanting to be a performer; the writers she admires... and the songs Rod Stewart turned down.

Monie Love arrives in this country with a rep as the only British rapper who matters. ...

After a three-year recording hiatus, INXS are back with X. STEVEN DALY corners the Australian band in a London hotel. ...

The Bristol trio talk about the time being right for their music; what they listen to; albums vs. singles; the Bristol scene and sound, plus the influence of reggae; their recording and mixing process and the place for remixing.

Monie Love turns a phrase and catches a beat

SCHOOL'S IN. Listen up as Monie Love explains what it takes to be a good rapper: "You need a good perception of the English language, ...

Interview by Steven Daly, Spin, May 1991

Declaring that De La Soul Is Dead, the beat-box beatniks turn ornery. Have they lost the plot? Or are they writing it? STEVEN DALY explains. ...

De La Soul are back, but rap's original hip-hop hippies are no longer wearing flowers in their hair. De La Soul Is Dead, the long-awaited ...

The professional controversialist on his new album, Kill Uncle; his refusal to explain his music, and other people's interpretations; his relationship with the music press; his hatred of Madchester; his lack of interest in pushing musical barriers; on Margaret Thatcher; lyrical taboos; working with Mary Margaret O'Hara; not suffering fools gladly, and not being a sex symbol.

Part One: Terry on setting up Jam & Lewis' Perspective label and producing Sounds of Blackness; what he and Jimmy ask of their acts; the duo's work ethic; looking back at The Time; on "attitude" records and revealing their artists' personalities; sustaining success and originality; race and the music business, and their role as producers. Part Two: Terry talks about producing his wife Karyn White; on what Prince and Madonna do which sets them apart; on Johnny Gill; on appealing to more than one age group; turning down established stars; on Ralph Tresvant and New Edition, and about the enduring talents of Janet Jackson.

Suede: All That Glitters

England's new Band of the Century hits a glam slam ...

The Rashomon interview, in which Bernard Sumner, Peter Hook, and The Other Two — Stephen Morris and Gillian Gilbert — share their respective memories and offer their varying opinions on: touring the USA; recording new album Republic; their side projects Electronic and the Other Two; the chaos that was Factory Records; the Haçienda fiasco; Acid House, and their relationship with Manchester.

Brett Anderson and Mat Osman talk about being out of place and initially dismissed as a joke; about Suede's breakthrough; their non-nostalgic Englishness; the effect of Melody Maker's "greatest band" headline; being provincial; the importance of the Smiths; lyrical concerns; their relationship with the UK's Nude label while being signed to Columbia in America; how they reach their fans; the US resistance to British pop and the nature of "taking America" (or not).

Joan Jett lives up to her bad reputation ...

PRIMAL SCREAM return to rock roots with Give Out but Don't Give Up. ...

Madder Rose: A Rose In Gloom

MADDER ROSE balance prettiness with dissonance on Panic On ...

BLUR stand up for their mod-rock roots on Parklife ...

LOLLAPALOOZA is the "alternative" tour, and H.O.R.D.E. a neo-hippie haven. Is there room for the ENIT Festival, the weirdest of them all? ...

The Bristol maverick discusses his treatment by the music press and talks about being pigeonholed; about not repeating Maxinquaye; about recording in Jamaica and what went wrong with Massive Attack; about Trip Hop and his relationship with Martina Topley-Bird; about his criminal past and his gangster uncles; about his memories of Bristol, the Wild Bunch and Smith & Mighty; and about his role in Luc Besson's The Fifth Element...

Tricky: On the Edge

Each year, Rolling Stone looks to the far edges of rock & roll in search of new artists who march to the beat of a ...

She's the wonder from the tundra, a guitar-strumming siren who spent the past two years on the road, driving herself to the top. Steven Daly ...

With a little help from her faeries, she is doing more than just getting by ...

Shortly after participating in the Woodstock "Day in the Garden" concert, Joni talks about missing the original festival; not really joining in with youth culture; her youthful tangle with polio; starting smoking at nine; her musical adventures; her Canadian bolthole; her dislike of the music business; her new album Taming the Tiger; her guitars and tunings; finding Jaco Pastorius; becoming a painter... and being reunited with her daughter.

Joni Mitchell: "I'd Rather Not Compromise. I'm In It For The Musical Adventure."

BY THE time she got to Woodstock, they were 25,000 strong — and it was twenty-nine years too late. But Joni Mitchell cared not that ...

Hot Pants, Hot Rods, Guitars that spit blood: How he went from a television-addicted high school loser to the new King of Heavy Metal ...

Britney Spears: Inside the Mind (and Bedroom) of America's Teen Queen

The child navigates becoming a woman while the former Mousketeer courts worldwide fame ...

"WHO WANTS to speak to me?" Fred Durst regards his cell phone with suspicion. "Adam Sandler?" The Limp Bizkit leader has been chatting with producer ...

Mr. Pierce talks about the making of Spiritualized's latest album, Let It Come Down: creating the orchestrations, the support of record company Arista; on making Ladies and Gentlemen We Are Floating in Space, and working with Jim Dickinson in Memphis; losing his old band and finding a new one; not being an autocratic bandleader; not being in competition with other bands, and the meaning of the sleeve of Ladies and Gentlemen...

This is a transcription of Steven's audio interview with Madonna. Hear it on the site here. ...

La Ciccone talks about her love of foreign films; about London then and now; about her new film Swept Away and other stage and movie projects; about being slagged off as an actress; about the difference between British and American class; and about her lapsed Catholicism and her devotion to Kabbalah.