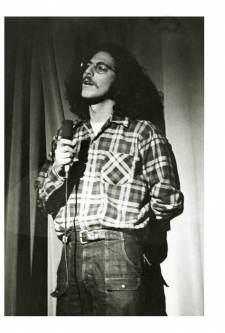 Los Angeles native Ted Alvy first heard rock and roll aged 9 on KFWB, where B. Mitchel Reed (BMR) became his favorite deejay. Teenage Ted met BMR at the June 1967 Monterey Pop Festival and became his producer at KFWB featuring album cuts and forever joining the conspiracy to improve music on the airwaves. He hosted Sunday Night Folk Festival on Stereo KVFM-FM, but was fired for playing folk-rock and sets of anti-war songs. He accompanied BMR to help pioneer Underground Radio at KPPC-FM Pasadena as Producer and substitute deejay.

Ted compiled the Record Library that was used to convert KMET-FM to Underground Rock in June 1968 where he secretly programmed the 24/7 automation system. He was an underground record store buyer at Les Carter's Music Revolution while attending UCLA Film School, then returning to KPPC-FM to join creative PD Les Carter. Ted Alvy became deejay Cosmos Topper and created cosmic KPPC station IDs and alternative commercial spots until the entire airstaff was fired. He continued at KMET-FM with his mentor B. Mitchel Reed until June 1976. Ted died in March 2012.

The Cros talks about the new vibe of co-operation between musicians, Monterey, the disintegration of Haight-Ashbury, seeing Cream play the Fillmore the night before, and all kinds of other fine stuff

Jerry Garcia and Bob Weir from the Dead, plus New Riders David Nelson and Marmaduke, talk about Workingman's Dead and the birth of the New Riders of the Purple Sage, while DJ Ted Alvy spins tunes and tries to keep order. Originally broadcast on KPPC-FM Pasadena in December 1970.

A splendid radio interview with Messrs. Mason and Wright in which they talk to DJ Ted Alvy about Meddle, the Zabriskie Point soundtrack, their quadraphonic p.a. system, and playing live. Originally broadcast on KPPC-FM Pasadena in October 1971.