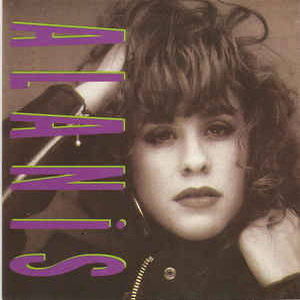 Adventures of Alanis in Wonderland

SHE IS THE newest cover girl for "alternative" rock, a populist answer to Courtney Love. Fans and critics throughout North America have embraced Ottawa native ...

IT'S AS IF Annette Funicello had grown up and become Janis Joplin. Just 11 years ago, Alanis Morissette was a cute, 10-year-old actress on Nickelodeon's ...

THE LATEST signing to Madonna's stable, this debut is striking in its maturity. ...

IF ANY SONG THIS YEAR CAN BOAST A million-dollar couplet, it is 'You Oughta Know' from the album Jagged Little Pill by Alanis Morissette. "Is ...

There's nothing more mild-mannered than a mild-mannered Canadian. But rub one up the wrong way and the consequences can be dramatic. And profitable. Just ask ...

Alanis Morissette: she's got the whole world in her hands. ...

Rock and Rage: Alanis Morissette Sings Her Heart Out

THERE IS SOMETHING quite disarming about the way Alanis Morissette slips into the room. The 24-year-old rock star has sold 28 million records, she has ...

The biggest female rock star of the '90s returns with an album even more schizo than Jagged Little Pill ...

Follow-up to Jagged Little Pill is big, bold and belligerent ...

How do you follow a 28-million seller? Simple, pretend you're Sylvia Plath ...

She's the oddest female star of recent years, a titan of high seriousness, musical ambition and lyrical angst. So what do you do: you ask ...

SAY WHAT YOU like about Alanis Morissette – and I intend to – there's no denying the girl can belt it out. Alone among the ...

SOMEONE IN Alanis-Iand has a plan. Rather than announce her imminent return to the charts with a sell-out stadium show or a celebrity-studded party, the ...

ONCE UPON A TIME, Alanis Morissette was God. Not just in her role as the Almighty in director Kevin Smith's Dogma, but to the 16 ...

Former phenomenon finds herself, but risks losing everyone else. ...

FEW ARTISTS manage to make a perfect album, let alone one which defines an era, changes the face of music and makes them the voice ...

WHEN BARELY POST-ADOLESCENT Alanis Morissette exploded spewing vitrol and bodily fluids with her raging accusation of the spurned, 'You Oughta Know' from the mega-hit Jagged ...