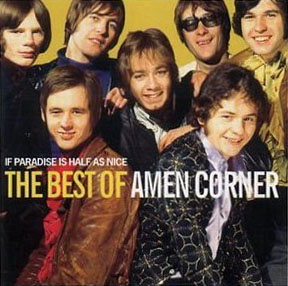 HUBBLE, BUBBLE, toil and trouble, and wowee Jimi Hendrix! The Hendrix-Move tour thundered off on its trip round Britain with a deafening start at London's ...

Rock 'N' Roll Is On The Way Back! — Say Amen Corner

ANDY FAIRWEATHER LOW, lead singer of the Amen Corner is a placid sort of bloke. But he blows his cool if you ask him about ...

This month Dawn James, our bird from RAVE, talks to the Amen Corner's Andy Fairweather Low. ...

AFTER TWO glasses of orange juice, Mr Andrew Fairweather-Low, of the Amen Corner, was observed staggering, shuffling and reeling in a dingy London alleyway this ...

JUST as everyone was beginning to think that the day of the teenage idol was over, another young 'god' has come quietly and modestly upon ...

Fair Weather: Andy Pleads, Don't Scream At Me Any More

WHEN DOZENS of emotional young girls screamed and hysterically rushed the stage in a vague attempt to grab hold of Andy Fairweather Low, the singer ...