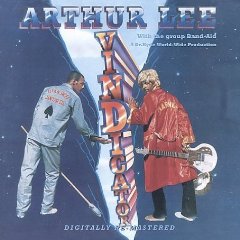 He also admits to a severe case of baldness. Otherwise it's still ARTHUR LEE, back in Britain with a new Love ...

The sometime Love leader talks about growing up in Memphis and South-Central L.A. and recalls his dreams of being a musician. He also describes a gay near-miss with Jimi Hendrix, rants about hip-hop, and spouts a lot of New Age gibberish.

Arthur Lee: On Life and Love

IT WAS easy to see that the sands of time had shaken this poor boy pretty hard. Twenty-seven-year-old Arthur Lee strolled into A&M's Hollywood offices ...

There's a lot of mileage in Arthur yet ...

LIKE VAN MORRISON, Arthur Lee has been gifted with enormous catalytic power in his writing, the often innocent enunciation of a phrase capable of transforming ...

REMEMBER Arthur Lee and Love? Love was the first rock band to sign with Elektra Records, which they did in late 1965. In approximately their ...

ARTHUR'S NOTHING like you'd expect him to be. No trace of the leather jacketed refugee from Blackboard Jungle high school punkery who lurks under that peculiar edifice ...

Who was your first manager then, Herb Cohen? ...

LOS ANGELES – Not since the 1972 release of Vindicator has Arthur Lee been widely heard on record, that first polo project seemingly marking the ...

Oh God, please, no!! I thought old Tobler had just about run out of material on Arthur Lee, but it seems he must have a ...

On The Horizon: Love Springs Eternal For Arthur Lee

LOVE'S LAST British tour left a confusion of critical comment in its wake. It seemed to me he was better than ever. But then there ...

This is a transcript of John's audio interview. Hear it here. ...

Love: Through The Ages (Of Prophets, Seers and Sages)

ARTHUR LEE, THE PSYCHO OF '60s PSYCHEDELIA AND FORMER LEADER OF LOVE, BREAKS HIS SILENCE TO KEEP A RARE APPOINTMENT ON PLANET EARTH ...

"I FEEL REAL PHONEY when my name is Bell." This may not mean very much to the younger generation, but for those who struggled through ...

Arthur Lee: We Have Ways Of Making You Talk

ONCE DESCRIBED by fellow band-member Brian MacLean as 'the baddest guy on the West Side of LA, the Cassius Clay of the streets' – Arthur ...

Report and Interview by Paul Lester, The Guardian, 21 May 2002

Arthur Lee was once bigger than Hendrix or Jim Morrison. Back on the road after six years in jail, Love's frontman talks to Paul Lester. ...

Retrospective and Interview by Simon Price, Independent on Sunday, 26 May 2002

He discovered the Doors, nurtured Jimi Hendrix and fronted legendary '60s band Love. Now, after six years in prison, Lee is back on the road ...

On your recent US warm-up date you asked, "What did the monkey say after the pitbull bit off his tail?" ...

ARTHUR LEE IS rock's almost-ran, never-was but could have been. A musical chameleon whose mythical personae have imprinted themselves on music history. He was the ...

MANY outrageous claims have been made on Arthur Lee's behalf — but most of them are true. ...

"I THINK Jimi Hendrix was the best guitar player all round and one of the best musicians, creators and innovators I ever heard in my ...

AS ICONIC gestures go, Arthur Lee raising a tambourine above his head, arms angled like he's cradling an invisible water pitcher, is up there with ...

SOMETHING STARDUST and sunshine had characterized those days of flowers and civil unrest in the western canyons of America's other neverland of dreams, Los Angeles. ...

Report and Interview by Andria Lisle, MOJO, May 2006

He missed a European tour last summer and it seemed the end had come. Now, Arthur Lee convenes a new band in Memphis. ...

The Everlasting Forever Of Arthur Lee

Flower-power myth maker who captured the dark side of the summer of love ...

Psychedelic-rock legend ARTHUR LEE began and ended his life in Memphis. In between was quite a journey. ...

Egomaniac, original, troubled genius: Arthur Lee — who died last month — was all of these and more, his band, the legendary Love, kicked viscerally ...