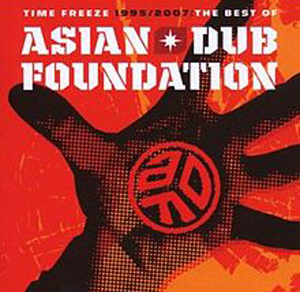 Take an assorted bunch of like-minded skunk rockers, big beaters and eclectic groovers, ply with brain-curdling tequila'n'ale cocktails, and then put them out LIVE! on ...

"BRITPOP IS AN ATTEMPT TO REASSERT A sort of mythical whiteness," asserts Aniruddha Das, aka Dr Das, bassist of Asian Dub Foundation, leaning forward in ...

Profile and Interview by David Stubbs, The Wire, January 2003

Community, collectivism, connection are keywords in Asian Dub Foundation's irresistible assaults on cultural apathy. From their Community Music roots they have established a broad popular ...

Rappers With A Cause: Asian Dub Foundation

Report and Interview by Paul Lester, The Guardian, 24 January 2003

They helped secure the release of the warehouse worker Satpal Ram from prison. Now they're tackling domestic violence, asylum, the war on terror and the ...

JOHN PANDIT is hopping mad. We were supposed to be discussing the latest album by Pandit's multi-cultural protest-pop collective Asian Dub Foundation, but our interview ...

ADF erupted into fiery bursts of energy during the film's kinetic scenes of rowdy celebration, violent confrontation and police brutality. ...