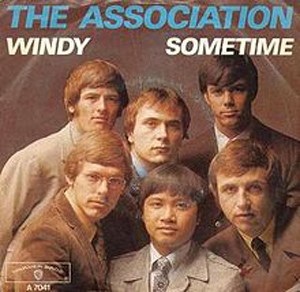 THERE IS A war going on in Vietnam and whether the United States has officially declared war or not – it is there, it's happening. ...

The Association: Electric Switch Paid Off

Profile and Interview by Mike Gormley, Ottawa Journal, The, 20 August 1966

SAN FRANCISCO — Six folk-singers got together in February, 1965, worked and waited for a year, changed to electric instruments and then — 'Along Comes ...

The Association: Russ & His Scene

(This is the first in a series of exclusive interviews with all members of the Association.) ...

"SUBTLE INSANITY," explains Jim Yester, is when the Association sings "Ba-nan-a Won-der-ful" in place of "bop-do-waah" at one point on their album track, 'Another Time, ...

The Association Concert — A Display of Fine Talent ...

TERRY KIRKMAN, HEAD OF THE ASSOCIATION ...

The Association: Just the Right Sound

IN DECEMBER 1999, the American performing rights company, BMI, published a survey of the most air-played songs of the 20th century. Top of the list ...

Ray of Light: The World of Sunshine Pop

ONE DAY RECENTLY, after listening to the latest Dirtbombs CD in my car and then hearing the Music Machine’s 1966 proto-punk hit ‘Talk Talk’ for ...