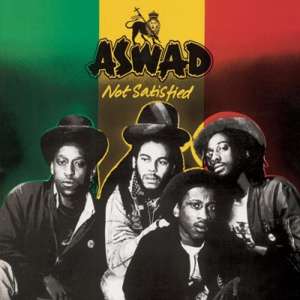 ON THE SURFACE it looks as though there has been something of a major breakthrough for reggae in Britain. ...

Aswad: Hot with the Rods

Aswad: The Other Cinema, London

ASWAD PLAYED on an Other Cinema music night, a reggae special, following a showing of Horace Ore's Reggae and Step Forward Youth and a documentary ...

And we don't careThe message: punk's now a business ...

REVELATION TIME. Aswad hadn't played any dates to speak of, and the audience were Aswad-starved, raring to rave. ...

ALL ROADS LEAD to the 100 Club in London's West End every Thursday night, where – "in tune to Silver Camel Sound" – the weekly ...

The attention nowgiven to British reggae bandsis largely due to the pioneering work of Aswad, who invented live dub and played alongside the early punk bands. But, ...

IT'S EASY TO feel alienated by certain aspects of reggae, not the least of which is the idolatry afforded it by impressionable whites: 'Milky Bar ...

MONDAY NIGHT in the Palais: forward and upful all the way. Aswad's 'Warrior Charge' as featured in Babylon and Brinsley Forde's performance in the principal ...

Linx and Aswad: Shades of Black

Profile and Interview by Richard Williams, Times, The, 26 November 1981

THERE IS A special role in British life for young black pop musicians, involving a task more serious than could ever be demanded of their ...

WE ARE THE CHILDREN OF THE RAINBOW ...

Aswad: Stepping Across the Front Line

CARNIVALS ARE crucial — all the best cultures have 'em. But the world has a way of perverting the simplest pleasures, and since 76, Carnival ...

IF REGGAE is dying, how curious that my interest in it is just coming to life. Years of comparative indifference (and ignorance) pass and suddenly ...

That Aswad are The Greatest Reggae Band In The World is the principal theme of Island Records' campaign to give the London-born trio the commercial ...

THE ANNUAL Nelson Mandela festival was held in perfect sunlight in the secluded grassy amphitheatre at Crystal Palace. Unfortunately one reason why it was so ...

GETTING A sense of perspective on Aswad is difficult at the best of times, and it's even worse with the release of this elpee because ...

STEEL PULSE spearheaded the charge of British reggae artists to America, but Aswad served notice at the Palace on Wednesday that it's ready to claim ...

DEEP JOY is in my heart that Aswad have had a giant hit single, a corking little pop reggae soul tune of some upliftingness. However, ...

ANYONE FAMILIAR with the sussed militancy of Aswad's early 'Three Babylon' period would never have expected them to take an easy option and 'go commercial'. ...

The Musical Diversity Is as Broad as the Quality Is High at Reggae Sunsplash at Greek Theatre. ...